In a chat with this paper he opened his heart out and shared his experience and what motivated him to take this extreme sport. 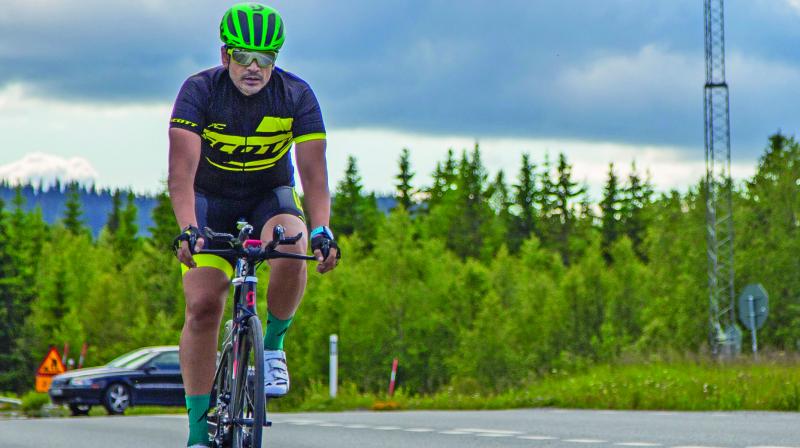 Siddhant Chauhan, a resident of Gurgaon, recently became the first Indian to successfully complete the Swedeman Xtreme Triathlon race organised in Are, Sweden, in July. A part of a league of xtreme triathlons around the world, this was the first time it saw participation from an Indian or Asian in a race dominated by Nordic and Europeans. Last year, he successfully completed the Celtman in the highlands of Scotland and became the first Indian to do. As a triathlete and Ironman certified coach, he has been training in exactly opposite weather conditions in New Delhi compared to what these races offer.

Swedeman comprises of 3.8 kms swim in Öster-Noren, finishing under Sweden’s largest waterfall in 15 degrees water temp, 205 kms bike ride through the windy Northern Wilderness gaining 2000 meters elevation and finally running 42.2 kms across 2 summits gaining 2300 meters elevation. In a chat with this paper he opened his heart out and shared his experience and what motivated him to take this extreme sport. Excerpts:

What encouraged you to become a triathlete?

I never dreamt of becoming a triathlete. Growing up in Jaipur, I always wanted to pursue basketball as a sport but back then there was very limited exposure to the sport and avenues to make a living out of it. Becoming a triathlete was never a consideration until a few years ago when I moved to Gurgaon. While doing some research on the web, I chanced upon this race called Norseman Xtreme Triathlon. The video was really fascinating and the event looked really brutal. No, that wasn’t the turning point still. I saw the video, liked it, in my head wished I was fit enough to do something like that and then moved on. Back then, I weighed around 107 kgs, busy trying to build a career and neglecting my fitness. During my stint at Reckitt Benckiser in India, I was supposed to lead the fund raising initiative for our charity partner “Save the Children”. Nitish Kapoor was then the MD for India business and very passionate about supporting philanthropic causes. He suggested that I sign up for Airtel Delhi Half Marathon 2014 and use the platform to raise funds. It was indeed a herculean challenge for someone who hated running. Once I completed the half marathon, I was able to surprise myself and went back to exploring the possibility of doing a triathlon. One step at a time and I began my triathlon journey in 2016.

How did you train yourself for Xtreme?

What makes these triathlons extreme is the nature of the terrain and weather conditions. These races are also self-supported and some part of the course requires the athlete to be accompanies by a support runner. Until recently, most of these races were organised in European countries between May – August. Cold temperature, winds, rains and significant elevation gain are some common attributes across these events. If you are training for any of these races here in Delhi, it is obvious that you will have your key training blocks falling during the summer months — which lie on the other end of the extreme scale. So there was no way to get accustomed to the cold weather. For swimming, I go to some local pools or my society pool, which is not very deep and has a max length of 20 meters. For cycling, it was tough to find someone crazy enough to join me for long distance rides basis my schedule. Hence most of my rides were indoors. For run, my coach worked on multiple blocks to get me conditioned for elevation – it was usual to incorporate a mix of stair runs in my building. I live in on the 11thfloor of a 13 story building.

What were the challenges you faced to get into this sport?

There are quite a few challenges: Firstly, a good infrastructure and eco-system. Every triathlete in North India is aware of the challenge he or she has to face with the onset of winters with limited heated pools available. In summers, these pools are flooded with children and parents and the management is not sensitive enough to block a few lanes for swimmers who are training or want to seriously practice. Secondly Knowledge. The primary source of information for most athletes entering the sport is either Internet or their peers (sometimes who are not even triathletes). It is good to be curious and learn, but it is not necessary that an approach that works for one athlete might work for you as well. I sometimes observe and notice the mistakes triathletes (amateurs) are making, but hesitate to interrupt as they feel that I’m questioning their coach’s training. Thirdly, there are hardly any local triathlons organized at a scale comparable to others happening globally. As a result, sometimes one ends up signing for them even though the swim would be organised in a pool, the bike ride and run would be on the road where the regular traffic continues to ply and the aid stations running out of stock early on.

What are your long term goals in triathlon?

I got into triathlons with just an ambition to be able to get a ballot for Norseman Xtreme Triathlon and finish it successfully. And this was my sole purpose until the second half of 2018. But some developments at personal front made me introspect and I no longer wanted to move from one race to another as just a finisher. I want to be able to improve my performance significantly and be able to have a considerable position as an age group athlete while competing at these platforms. My long-term goal is quite ambitious — to be able to qualify for the Ironman World Championship as an Age-Group athlete and at All Xtri World Championship. I also want to use my learning and experience to be able to mentor other aspiring triathletes.

Tell me about your new project.

I recently conceptualised and launched Project Trinomics, with a sole objective of a desire to achieve performance standards comparable at international platform. Trinomics — is a project, a dream, a journey, which I am embarking upon to get to the goals I have set for my self — a qualifying slot at Ironman World Championship and All Xtri World Championship. It seems far away from where I currently stand, but where I have reached today is also quite far from where I started. This will require complete dedication — 100% game face every single day until I make it there. I see Trinomics also as a channel to help and assist many other age group athletes, like me, who are committed and have similar goals. During my journey I will be tapping into knowledge resources and experts into various related domain who have the know-how of what it takes to get where I want. Right from training strategies, planning race calendar, strength and conditioning, nutrition, rehab and race day psychology.