The year was 2014, he bought equipments to escalate his running capabilities but there was a greater burden on his shoulders. 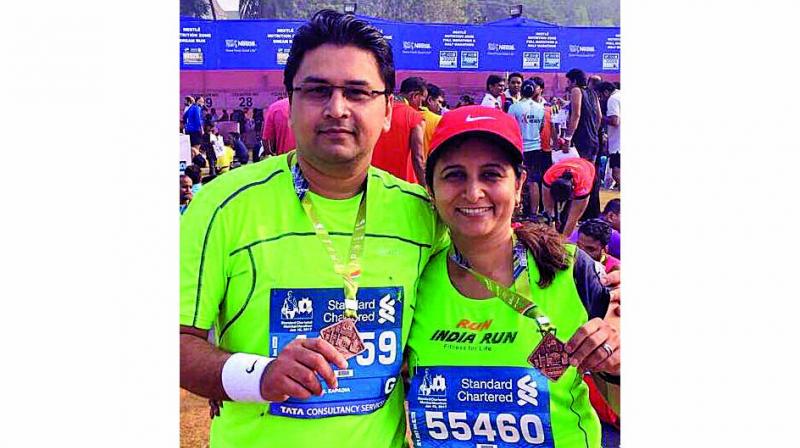 The first ever marathon of his life was infused with a tragedy. Munjal Kapadia, who has  come a long way to the international stage as a runner, learnt that his father has been diagnosed with liver cirrhosis. The year was 2014, he bought equipments to escalate his running capabilities but there was a greater burden on his shoulders.

A father of two, Munjal was facing a huge quandary. Being the only one in the family with the similar blood group, he made the decision to go on with the donation. “My kids were quite young then. Now that I think about it, I was lucky to help the person who gave life to me,” he says.

It was a live surgery where both father and son went under the knife for 12 hours. Munjal donated 70 % of his liver. Also this was the first time something like this was taking place at the Global Hospital, Parel.

Four years down the line, he has certificates from Europe, Africa and Asia for completing multiple marathons. This year, he will run in Las Vegas to tick-off North America from his list of continents.

“After the surgery, I was more eager to get my fitness back and start running again. I had just started then but the doctors told me to not run for a while. The day I felt fine, I started it with a jog. Running inspired me to return,” he says.

Soon, he became a member of the seven-continent club. The motive of this organization is to complete marathons in all the continents of the country. Till date, 19 men and 30 women have completed a half-marathon in all seven continents.

Kapadia’s feat has been rather extraordinary. In 2014, he ran the Mumbai Marathon in January and the same year he went through the surgery. The next year, he was training and recovering.

“I was gearing up for the 2016 Mumbai Marathon and once I finished that I wanted more. So I researched and then I found the Norway midnight marathon and I enrolled for it,” says the 40-year old.

With Asia being his first continent, the completion of the race in Tromso added another badge to his continent collection. “Then my wife and I signed up with the seven continents club. I showed them the certificates so two spaces were marked already,” he tells.

Last year, Munjal along with his wife Neha Kapadia ran in the jungles of South Africa with other members of the guild.  It was the ‘Big-5’ marathon which is regarded as one the most challenging tracks in distance running.

A plastic engineer by profession, he made a career for himself. Munjal is a first generation entrepreneur in his family. On Sunday, he will run in the KANAKIA Monsoon Marathon Challenge with 3500 runners.