A video was circulated on Twitter showing Sania Mirza's son Izhaan with his parents and some members of the Pakistan cricket team. 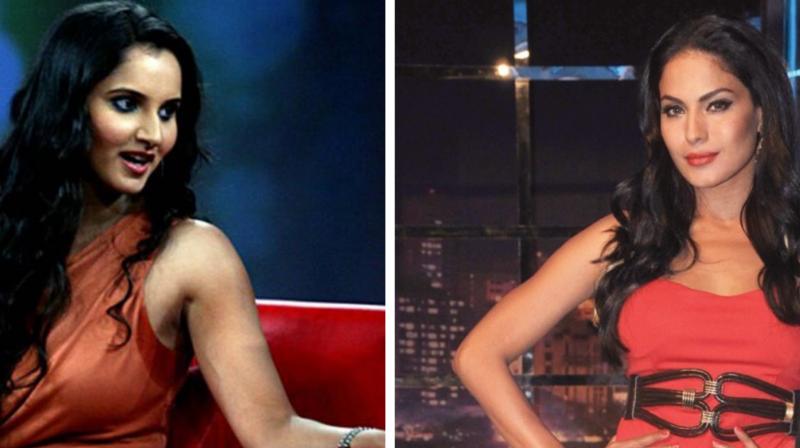 ania Mirza and Shoaib Malik were also targeted by many people on social media who shared pictures and claimed that the couple was partying a day before the much-awaited IND-PAK clash. (Photo: AFP)

Mumbai: Tennis star Sania Mirza and Veena Malik had a twitter spat recently after the Pakistani actress questioned the sports icon over parenting.

A video was circulated on Twitter showing Sania Mirza's son Izhaan with his parents and some members of the Pakistan cricket team. Veena Malik questioned Sania's decision of taking her nine-year-old son to a "sheesha place" as it could prove to be hazardous for the child.

"Sania, I am actually so worried for the kid. You guys took him to a sheesha place isn't it Hazardious? Also as far as I know Archie's is all about junk food which isn't good for athletes/Boys. You must know well as you are mother and athlete yourself? (sic)" she tweeted on Monday.

Sania Mirza replied back by saying that she cares about her son a "lot more than anyone else does".

Veena Malik also took a dig at Sania Mirza's husband --Shoaib Malik's junk food habits. Mirza shot back by saying, "I am not Pakistan cricket team's dietitian nor am I their mother or principal or teacher."

Veena,I hav not taken my kid to a sheesha place. Not that it’s any of your or the rest of the world’s business cause I think I care bout my son a lot more than anyone else does :) secondly I am not Pakistan cricket team’s dietician nor am I their mother or principal or teacher https://t.co/R4lXSm794B

Retweeting a video shared by Veena Malik, which is no longer available, Sania Mirza said the video was shot without permission.

The spat got uglier after Veena Malik tweeted that she was blocked by the tennis star. Veena Malik also stated that Mirza deleted her tweet in which she had mentioned about a magazine featuring the Pakistani actress.

Have some guts & don't delete ur tweets.Fortunately the technology has progressed so much that people can't deny their acts.Oh the magazine's cover u mentioned had morphed images.Also I can bringup all the controversies U have ever had bt I would rather not divert the discusion. pic.twitter.com/8qednFvEBz

"Dearest Bhabhi, Attacking someone personally and reaching new heights of being low will not take you anywhere.  Love, Veena Malik," the Pakistani actress wrote in another tweet.

Apart from Veena Malik, Sania Mirza and Shoaib Malik were also targeted by many people on social media who shared pictures and claimed that the couple was partying a day before the much-awaited IND-PAK clash.

PCB has clarified the players did not violate the curfew, and the photos of the players dining and partying were not from the eve of the game.