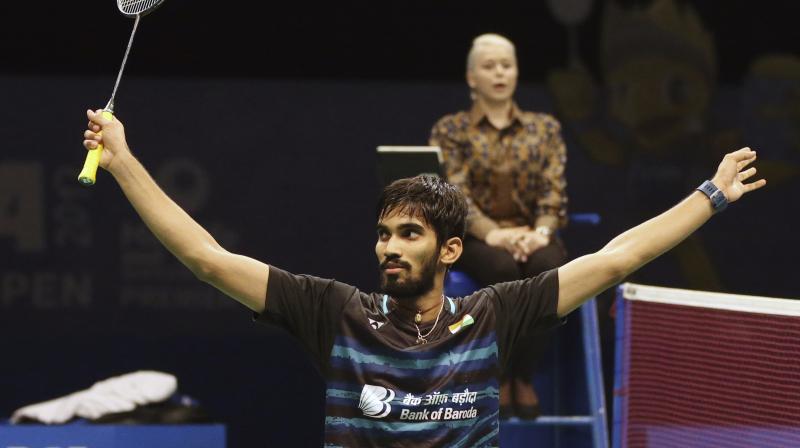 The Indian shuttler, who had defeated world no 1 Son Wan Ho of South Korea in the semifinals, took just 37 minutes to overcome Sakai's challenge 21-11, 21-19.

The former world no 4 started off well, as he set nudged forward into a slender lead. Sakia, who was looking to play at the nets, was being pushed back by Srikanth early on, as the Indian took a 6-4 lead.

He progressively went on to increase his lead as he gained momentum after the change of ends, finding himself with almost half the task done, leading Sakai 18-9. It was only a matter of time before Srikanth clinched the first game 21-11.

The second game however, presented a completely different challenge. Sakai changed his approach, exhibiting a fleet-footed game, as he covered the court easily. This tactic took Srikanth back a little, as the Japanese surged into an 11-6 lead.

This is when Srikanth upped the ante, bringing out the lobs, the smashes, the drop shots, and the short-arm body smashes. The latter tactic worked brilliantly against Sakai, who did not have time to react to the short-arm jabs.

With the scores level at 19-19, Srikanth produced two more short-arm jabs to clinch the second game, and the match.

A bit of psychological warfare going on there? Srikanth asks for a shuttle change after going down 2 points, but Sakai wants to stick to the ‘winning’ shuttle. However, the Indian comes back with a couple of great bits of attacking play. However, Sakai maintains his slender lead. Srikanth goes for a short-arm jab directly off a Sakai serve to level it up 18-18. The Japanese goes for a review, but it shows that Srikanth’s shot was on the line.

They are both going level with each other, at 19-19. However, the Indian does brilliantly to pull the game back from the dead, to take two successive points from this, with two short-arm jabs aimed at Sakai’s body, to notch up his first Indonesia Open Superseries victory.

He may be behind, but Srikanth is testing Sakai to his wits’ end, moving him all around the court. However, Sakai has responded well so far, coming up with the answers on most occasions. He stes up successive smashes to draw level at 13-13. The Indian shuttler has truly gone on the offensive, and takes the lead with another big smash. However, Sakai levels it up again with a drop shot of his own. Playing at the nets, Srikanth plays another body smash to bring the score to level at 15-15.

The Japanese shuttler has done well to come back in the second game. He has shown great character to chase the lost causes, and keep himself in the rallies. Srikanth, who does not seem to be too fond of long rallies, comes up with the unforced errors this time.

Sakai keeps making the unforced errors, but he comes back strongly with successive smashes against a floored Srikanth. Nothing the Indian could do about that. However, Srikanth comes back with a couple of smashes of his on, forcing Sakai into yet another unforced error.

Brilliant start by Srikanth! It has been easy going for the former world no 4, here. He has barely been troubled by Sakai, as he negotiated the smashes, and the drop-shots with equal ease.

The Japanese shuttler is bringing his smashes into play but Srikanth has not been troubled by that, and forces Sakai to make an unforced error, as he pulls away into a big lead.

Sakai hits it long, but he challenges the umpire’s call. This is the first challenge in the men’s s ingles final. Review shows that Sakai had hit it just inches out of the byline.

It has been a bit of an uneventful start to the final, here in Jakarta, with Srikanth taking a narrow lead over his Japanese opponent. The Indian leads half way through the first game.

Srikanth is trying to push Sakai back, but hits it long, early on, as the Players go neck and neck. However, the Indian takes the lead, early on, in the first game.

Both Kazumasa Sakai and Kidambi Srikanth seem to be practicing playing close to the nets. An indication of how the match may pan out, maybe?

The two players are out on the pitch, and are getting set for the final showdown.

Jakarta: The semifinals of the Indonesia Open Superseries have been rather bittersweet for the Indian badminton fans.

While giant killer HS Prannoy’s dream run, in which he vanquished Olympic silver medallist Lee Chong Wei and Olympic champion Chen Long, to make it through to his first ever semifinal appearance at a Superseries event, he came short in the last four, losing 21-17, 26-28, 21-18 against Japan’s Kazumasa Sakai, who now faces Prannoy’s compatriot former world no 4 in the summit clash.

Srikanth is on a comeback trail after a an injury layoff, and has already shown glimpses of the form that took him to number four in the BWF World rankings in the men’s singles category. Earlier this year, he made it to the Singapore Open, where he lost out to compatriot B Sai Praneeth 21-17, 17-21, 12-21.

Srikanth’s best performance in the Indonesia Open so far, has been a run to the final, two years back, when he lost out to Tommy Sugiarto of Indonesia in the summit clash.