Prime Minister said the entire nation was extremely delighted on his victory. 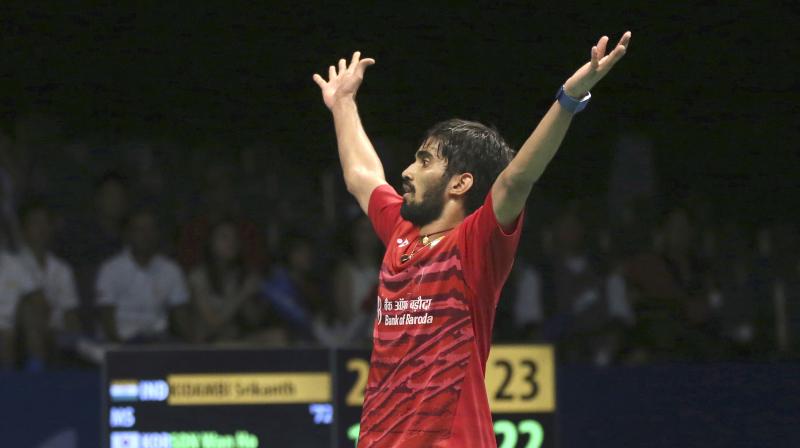 "Congratulations @srikidambi! We are extremely delighted on your victory in the Indonesia Open Super Series tournament," tweeted Prime Minister Modi.

"Congrats @srikidambi on your superb win at #IndonesiaSSP Finals. You've made us all proud. Glad to announce Re 5 lakh award from @BAI_Media," Sarma tweeted.

Earlier in the day, Srikanth came out with a spectacular performance as he defeated unseeded Kazumasa Sakai of Japan in straight games to win the men's singles title of the Indonesia Super Series Premier badminton tournament in Jakarta.

The 24-year-old Indian shuttler was just flawless in his performance as he didn't give his unseeded opponent any chance and won the match 21-11, 21-19 in the summit clash that lasted for 36 minutes.

Srikanth, who had earlier kept his nerve as he clinched a 21-15, 14-21, 24-22 win over second-seed Son Wan Ho of Korea in a 73-minute semi-final clash, took the opening game rather comprehensively 21-11. However, he seemed in discomfort initially in the second game.

But trailing 11-6, he staged a tremendous comeback, as he recovered remarkably to level things at 19-19 before sealing the match with a body smash.

Overall, it is his third Super Series title as he has also emerged champion at the Indian Open Super Series in 2015.