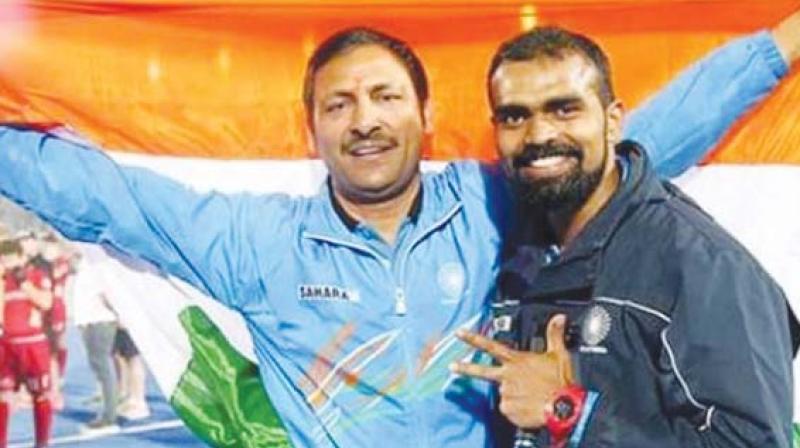 Harendra Singh (left) has taken over as the Indian men’s team’s coach while Sreejesh P.R. has been named the captain.

New Delhi: “No individual play”, “focus on basics” and “learning to bridge the gap between being almost there and the podium”, are the three things that newly-appointed men’s hockey coach Harendra Singh has earmarked for his boys.

Indian hockey has seen turbulent times in the last few months. Within a span of 11 months, India have had three coaches — Roelant Oltmans sacked last July, his successor Sjoerd Marijne switched back to the women’s team within seven months before Hockey India turned to Harendra, the man who had guided the juniors to the World Cup gold two years ago.

Harendra, named the women’s coach last year, led them to the 2017 Asia Cup win before guiding them to a fourth-place finish at the Commonwealth Games at Gold Coast — the venue where a similar finish by the men’s team called for drastic changes.

Back home after a string of good performances, Harendra was busy preparing a roadmap for the women’s World Cup when he was suddenly handed the men’s role, swapping places with Marijne.

Harendra was tactful when asked if HI’s sudden change of plan had thrown off his planning and whether there was enough time to train the men for the Asian Games and the World Cup.

“My firm belief is that coaches worldwide follow a similar strategy when it comes to leading a team, be it women or men,” Harendra said from Bengaluru where the squad is preparing for the Champions Trophy. “There is not much difference in how you prepare a team but yes handling them and working according to a player’s strength and weakness is where one needs to make adjustments.

“I have been associated with these players, be it domestic, junior or international level and I think that is my biggest strength with this team. It is a dream assignment, and this being a crucial year we have begun work with great intent already.”

World no. 6 India have seen mixed results of late and Harendra says it all comes down to strong basics.

“I saw them at the CWG my view is that they were punished because they faltered in applying the basics correctly under pressure.

“There were a good number of circle penetrations but the finesse inside the circle was missing. Similarly there were defensive lapses with the players sometimes unable to take correct decisions.

“All this begins with having strong basic skills, which should come as naturally as sleeping and eating. Players only have fractions of a second to decide and it is where matches are won and lost these days.

“Creating match-likes situations during training is one of my key area of focus as we need to make training sessions more meaningful.”

‘New room mates’
On his first day at the national camp in Bengaluru last week, Harendra made the players switch room partners — something he has done with all his teams before.

The juniors were put up with the more experienced ones, the south players with those from north or east while also putting together the ones that speak entirely different languages.

Harendra believes it is this off-field bonhomie that leads to better results on the field. “Yes, it is important for players to understand each other and break that culture and language barrier. I have given them all one mantra — you are one team. It is simple, basic but very important.

“There is no room for individual play and they have to think of themselves as one team. No one is a hero, no one is a zero. We all succeed and fail together and everyone has to understand it,” the coach reflects.

Skipper Sreejesh P.R. who first joined the junior national camp under Harendra in New Delhi in 2003, says he owes his now-impeccable Hindi speaking skills to this tactic.

From a 14-year-old teased for not knowing Hindi and wearing a lungi, Sreejesh — forced by Harendra to share a room with the north boys — outsmarted them within a few months.

Laughs Harendra, “One has to do such things to build a team.”

Harendra’s first assignment will be the Champions Trophy in the Netherlands in June, a tournament he believes will set the tone for the Asian Games and the World Cup.