Chief coach Sjoerd Marijne says the poor show was a “result of individual level of the players not being good enough.” 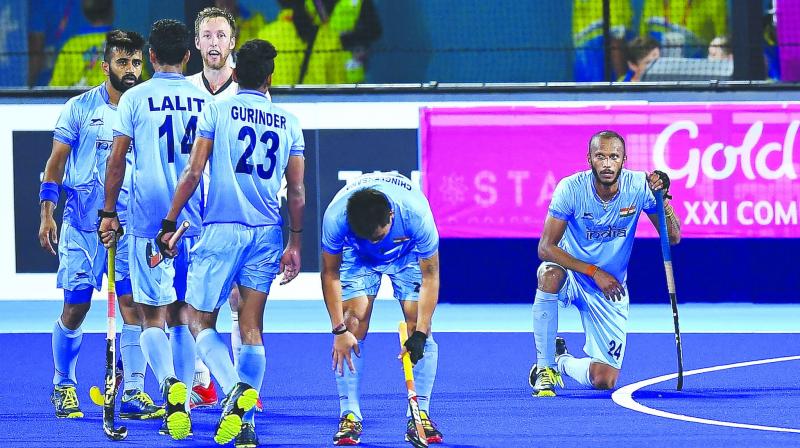 India finish fourth at the Commonwealth Games losing to England and New Zealand in key matches.

New Delhi: Was it a selection blunder, failure to execute plans or lack of experience? The Indian men’s hockey team’s fourth-place finish at the Commonwealth Games has thrown up a lot of questions as the team returned empty-handed for the first time in eight years.

If one were to go purely by numbers and history, India were among the favourites at the Gold Coast Games.

Ranked world no. 6, India had picked up silvers at Glasgow 2014 and Delhi 2010, and dished out consistent results in the last two years. At Gold Coast, they were the second highest-ranked team behind world no. 1 Australia.

But then hockey is not played on paper and world rankings amount to nothing, as India found out the hard way within 10 days where they lost to England and New Zealand and were stretched by world no. 24 Wales, Pakistan and Malaysia.

India’s fourth-place finish exposed their frailties and lack of planning, at a time when they have constantly talked about breaking into the top five — places held by Australia, Argentina, Belgium, Holland and Germany.

India’s show was lackluster to say the least with the team playing to almost no plan or structure and appeared under intense pressure when opposition changed tactics.

Chief coach Sjoerd Marijne says the poor show was a “result of individual level of the players not being good enough.”

“There are three things for me from this tournament,” said Marijne from Gold Coast when asked about what went wrong.

“One, we created a lot of opportunities but the conversion was not good.

“Secondly, the individual level of the players was not good enough and they struggled with themselves. Thirdly, there were too many soft goals and penalty corners against us.”

India travelled with a young team preferring speed and fitness over experience. The decision to leave out Sardar Singh in the midfield, defender Birendra Lakra and striker Ramandeep Singh showed what they missed out, as the team struggled throughout. Even world no. 13 Pakistan — whom they beat seven times since April 2016 — pressed India hard and the young guns wilted under pressure for a 2-2 draw.

Hockey and football are two sports where the role of a coach/manager assumes great importance. Australia were the invincibles under Ric Charlesworth, while the famed Marcus Weise led Germany to a golden double at the Olympics before joining football.

Marijne has laid a lot of emphasis on his player-driven approach — players are expected to chart their ways in training sessions and even match situations — but if anything, India appeared clueless when in need of a Plan B.

Asked if the approach needed a re-look, Marijne replied in the negative.

“This tournament did not go the way we wanted it, but it doesn’t mean everything was bad and we have to change everything. I don’t agree in this point because here we didn’t struggle. The real reasons are the ones that I discussed before and yes, we need to work on those.”

Penalty-corner conversion was another area of concern, besides poor finishing. India earned 39 penalty corners in all, of which 10 were converted.

India recently hired the just-retired Chris Ciriello of Australia — a master drag-flicker of his times — but the move too seemed to have little effect on their performance.

Said Marijne, “Penalty corner conversions are the not the same anymore. It is not that you just have a free shot from the top of the circle (and you score).

“Injection, trap and drag and you have the defenders from the opponent. If the first three are not perfect and the last point is getting better from the opponents with running in, it gets difficult to score.”