Sticks over guns as Tirkey takes hockey to villages

The Adivasi tournament is known more for its fierce competition and most intriguingly, its prize — a goat. 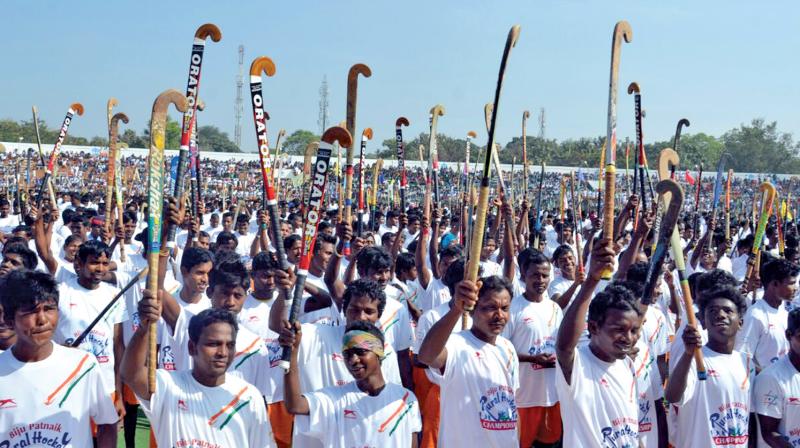 Players at the inauguration of the Biju Patnaik Rural hockey championship that commenced in Rourkela last week.

Here’s a quiz question. Who captained India to their first Olympic gold medal in 1928, and what was special about this player?

A few might be able to name the player but most would not know the significance of the latter part of the question.

Jaipal Singh Munda, who led India to the first of eight glorious Olympic golds, was an Adivasi and begun a tribal movement that fuelled sporting and political ambitions in Ranchi, Jharkhand, in 1938.

Much before the national game could spread its wings to the villages of Punjab or the lanes of Kodagu or Coorg as it was earlier known, an Adivasi had shown the way to the country. A path India went on to make their own for a long time at the Olympics.

It is that spirit and sporting nous that Dilip Tirkey, former India skipper and the country’s most capped field hockey player till date with 403 internationals, is looking to evoke with the Biju Patnaik Rural hockey championship that commenced in Rourkela last week.

The numbers involved are incredible. A total of 1,458 teams and nearly 16,000 players from Jharkhand, Odisha and Chhattisgarh — the organisers claim that it is the largest hockey tournament in terms of participation across the globe — made for a spectacular sight as they filled up the main hockey pitch at the Biju Patnaik Stadium when Tirkey declared the event open.

Organisers have sought officials from the Guinness Book of World Records and the Limca book of Records in an effort to register it as the biggest hockey tournament in the world, in terms of number of players involved and participating teams.

A Padma Shree and a Rajya Sabha member, Tirkey though choses to dwell on more than the numbers. “It is not just the record that we are aiming at. Youth in this part of the country sometimes pick up guns at an early age,” he said referring to the Maoist unrest in the region.

“If we can teach them to choose sticks instead and provide them with facilities which villages and smaller areas don’t have, we believe we can shape a better future. Sport can become a vehicle of change and can fuel ambition and direction among them.”

Tirkey has being among the shining lights of the tribal belt in Indian hockey. Like him, there have been several known names from the region — Michael Kindo, Lazarus Barla, Ignace Tirkey, Prabodh Tirkey and current player Birender Lakra — but the internationals can be counted on fingers.

“One question that I kept asking myself when I retired and became a Rajya Sabha member was that how could I give something back to the sport and do something for the players of this region.

“Children here like to play hockey more than cricket but they come from poor backgrounds. While the world has moved ahead we still have families who do not have electricity or are struggling to earn a good living. It is time we change it.”

The same was true for India defender Lakra, whose village got electricity only after his triumph at the Asian Games. Lakra says by the time his parents could watch him on TV, he had already played more than 30 internationals.

“These are the things we want to provide and be a catalyst of change,” says Tirkey.

The rural event is not the only one of its kind in the country. India, a heartland of hockey, is known for its affinity to the sport and leading the way are the famous Kodava and the Khassi tournaments in Kodagu and Sundargarh, respectively.

Nestled in the western ghats of Karnataka, Kodagu has for ages hosted the Kodava festival that speaks of the spirit and the love of the locals for the national sport.

Started in 1997 and open only to the members of the Kodava community, an ancient warrior tribe, the tournament is a spectacle and involves more than 300 teams. It is held by families and there is no age or gender barrier.

Today, the district has produced over 50 internationals with seven of them representing the country at the Olympics. The noteworthy among those are B.P. Govinda, M.P. Ganesh, M.M. Somaya and C.S. Poonacha.

The Adivasi tournament is known more for its fierce competition and most intriguingly, its prize — a goat.

Says Tirkey, whose foundation has announced a prize purse of Rs 30 lakh for the winners, “There is a passion for hockey in this region. You will see children play hockey with makeshift sticks and old balls.

“They need channelisation and proper funding in order to help them build their careers. The Khassi Cup sees one of the toughest fights in a domestic event and the teams do it just for a goat.

“We decided to keep prize money to motivate the players and make them understand that they can find a livelihood too through hockey.”

During his playing days, people in Tirkey’s village would huddle around two tiny TV sets and watch him in action even if it was at 3 am! The 39-year-old understands that he can tap this love for the game in villages where passion for the game is in abundance but facilities and modern training is an alien concept.

“This tournament will be held over two months and we plan to rope in emerging talent into our academy and provide them with the best of amenities. It is time we showed them the way,” he says.