Manisha lets her gloves do the talking at Boxing Worlds. 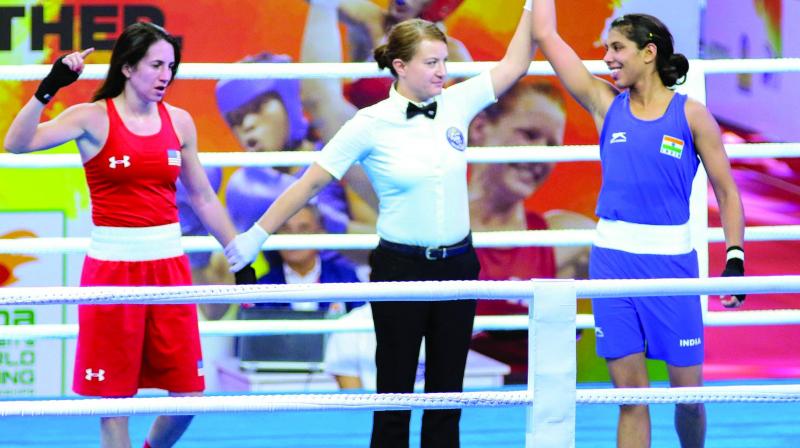 Manisha Moun (blue) is all smiles as the referee declares her winner against Christina Cruz of USA in the 54kg pre-quarterfinals in New Delhi on Friday. (Photo: PTI)

New Delhi: It was a dream debut for Manisha Moun at the 10th Aiba Women’s World Boxing Championships as the Haryana girl demolished Christina Cruz of the United States in unanimous decision (5-0) to move into the 54kg pre-quarterfinals here on Friday.

Later, former champion L. Sarita Devi (60kg) lived up to the expectations and outpunched Diana Sandra Brugger 4-0 to ring in an all-win day for the hosts.

“It was a tough match but home support motivated me,” said Sarita after the bout.

Egged on by the home crowd at the KD Jhadav Hall, Manisha opened the Indian campaign on a positive note on Day Two of the event. She started on attacking note and landed a few straight punches on the two-time World Championship bronze medallist. Cruz being the experienced campaigner exchanged a flurry of punches later but Manisha used her height to great advantage to douse her attack in the first round.

The US pugilist fought back in the next round and was seen more aggressive but nimble-footed Manisha started maintaining a distance from Cruz and never gave her chance to be back in the game.

In the third round, there was exchange of punches but Manisha went into defensive mode. Cruz was taking the initiative but in the last 50 seconds Manisha retaliated with her fiery jabs to outpunch her opponent.

“I gave my 100 per cent... the coaches made me believe that I can win. I wasn’t nervous because everyone had confidence in me. I stuck to the game plan,” Manisha said after her bout.

Manisha, however, will be taking on reigning world champion Dina Zholaman of Kazakhstan, who beat Muzuki Hiruta of Japan 4-1. Manisha, though aware of Dina’s reputation, would draw inspiration from her victory over the Kazakh in Poland this September.

Among the foreign participants, Mira Potkonen of Finland edged past Australian Anja Stridsman in a split verdict of 3-2 in favour of the Rio Olympics bronze medal winner. The CWG gold winner matched punch for punch and managed to impress the third judge, a Thai, who gave full points in two rounds.