The former champions are sitting pretty at the moment after hat-trick of wins at home. 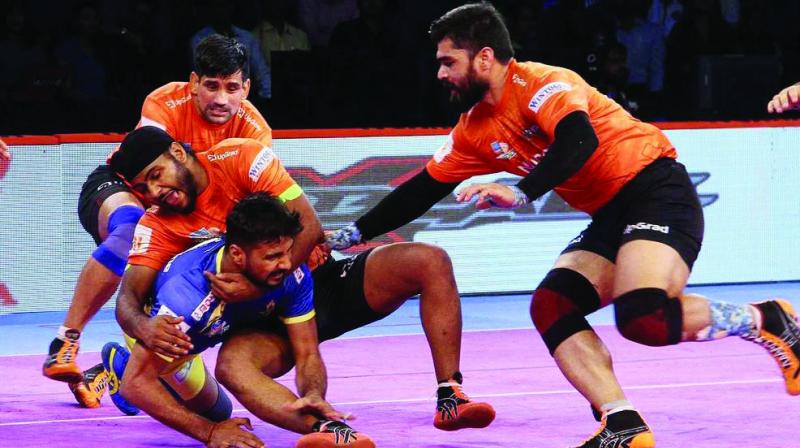 U Mumba defence all over Tamil Thalaivas raider.

After two dismal seasons, former champions U Mumba had invested heavily on defence in the ProKabaddi League auction ahead of the sixth season. They spend a crore rupees on Iranian skipper Fazel Atrachali and 46 lakhs on Dharmaraj Cheralathan. The defence has performed as per expectations so far with Fazel leading the pack and likes of young Surinder Singh who was bought for just 6.6 lakhs punching above their weight.

But their raiders have complemented their defence well by earning points in a heap and unsettling the rival teams. Siddharth Desai bought for 36 lakhs has led the raiding department but when he got injured ahead of the home leg the likes of Abhishek Singh and Darshan Kadian have stepped up. U Mumba had spent most 42.8 lakhs on a raider in Abhishek and he has made it count for them especially in the home leg. Darshan has been leading raider in last two games and against Tamil Thalaivas on Thursday he was exceptional. Besides, other raiders Rohit Baliyan and Abolfazl Maghsodlou have performed decently whenever given the chance.

U Mumba are sitting pretty in Zone A table with 56 points which is 18 points ahead of second placed Puneri Paltan who also have played 14 matches so far. Gholamreza Mazandarai side will now take a much needed rest before meeting Gujarat Fortunegiants in Ahmedabad on Wednesday. U Mumba had lost to Gujarat team and Haryana Steelers in home leg.

Gholamreza new problem is that he now has plenty raiders to select from ahead of the Ahmedabad League. “Siddharth Desai was making a comeback after an injury. I think he needs more time to recover. We are having a good selection headache because we have four to five very good raiders. They are all playing well, and it gives the team management a good feeling when we are spoilt for choices while choosing our lineup,” he said after the match.

With resounding 36-22 win over Ajay Thakur led Tamil Thalaivas on Thursday, U Mumba finished home leg on a high with four wins out of its six matches at home, the best performance by any team in its home leg in this season so far. They won last three on the trot in the Inter Zone challenge week and showed no signs on fatigue even after playing six matches in seven days.

“We could have played better than we did but I am happy winning four of the six matches. Our form is good, and the people are supporting us so it’s a good feeling,” Gholamreza said.

An elated skipper thanked the U Mumba fans for their support. “I would like to thank all the fans for their continued support. They gave us a very good feeling every time we stepped onto the mat. Their support reflected in our victories. It is a dream for all foreign players to play here because of the support we get from the fans,” Fazel said.