Deshpande and his team conduct workshops in Germany and other countries. 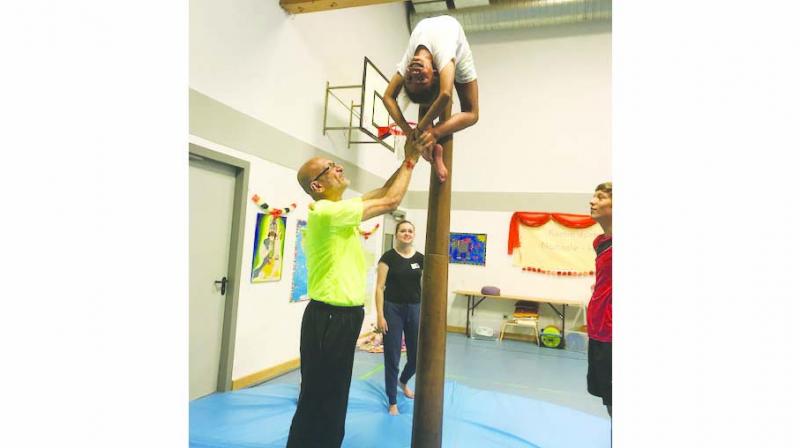 Uday Deshpande and his team at Shree Samartha Vyayam Mandir (SSVM), Dadar have been conducting Mallakhamb workshops in Germany from 15 years and now they are popularising the sport in other countries as well. According to Deshpande the sport is played in 35 countries.

Buoyed by the response SSVM is hosting the first ever World Championship in Mallakhamb in February conducted by Vishwa Mallakhamb Federation (VMF). “I have travelled to 35 countries and the response has been immense. We expect close to 20 countries to participate in the World Championship. Number of participation will be higher than cricket world cup,” quipped 65-year-old Deshpande who is the General Secretary of VMF and has been teaching Mallakhamb for around five decades. He informs that fifteen countries have already responded to participate in the event in Mumbai.

The first workshop was conducted in Bevhonerzentrum and the second in Haus Buchenreid. Senior Samartha coach Neeta and senior German Mallakhamb coach Ruth Anzenberger imparted the Mallakhamb training to the young German children.

“It all started when a 49-year-old German lady named Jutta came to Pune to learn Mallakhamb. She had been before in Pune in 1992 to learn Yoga and was impressed after she was Mallakhamb. But she was told that the sport is for kids and not for  adults. She was disappointed and went to Osho Ashram where she was told she can contact Desphande in Mumbai to learn Mallakhamb,” recalled Neeta who is Secretary, Administration, SSVM. She is also Associate Professor in Department of Psychology and Vice Principal in Ruparel College.

“She (Jutta) learnt Mallakhamb at SSVM and when she went back she started doing it there. Later they invited us to conduct workshops in Germany and that is how the cultural exchange started between the two countries and now it is spreading to other countries as well,” she added.