It was a similar story at the start of the second half as Delhi continued to score tackle points and led 18-13 after 25 minutes. 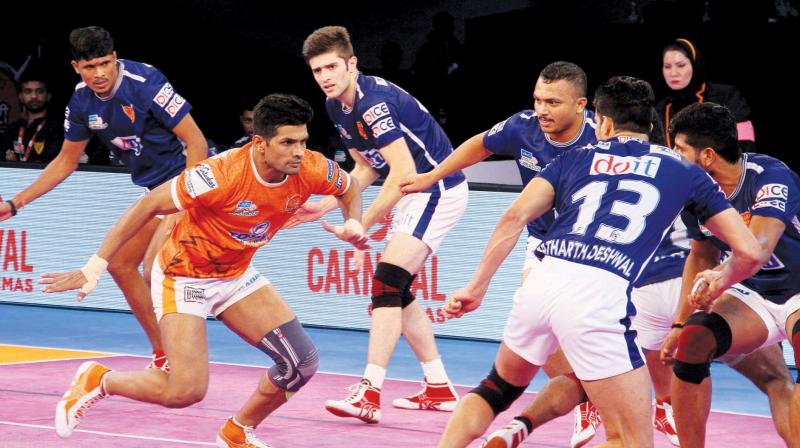 Puneri Paltan made a strong comeback in the second half to beat Dabang Delhi 34-31 in a Pro Kabaddi Season 5 match on Sunday. It was a disappointing end to the season for Dabang Delhi as they lost for the 16th time. Puneri Paltan, even though they were ahead for most of the match, turned the tie on its head in the last five minutes. Deepak Hooda was the man of the match for Pune and ended up with 10 raid points. Abolfazl was the most successful raider for Delhi as he scored eight points.

Having already secured a place in the super play-offs, Pune have 73 points from 19 matches and are third in Zone A. Delhi’s dismal season came to an end as they finished bottom of the table with 38 points from 22 matches.

Pune made a quick start to lead 3-0, but Delhi fought well to get the lead. The visitors inflicted an all out in the 16th minute to lead 13-9. Pune were struggling to come to terms with Delhi as they trailed 10-14 at the end of the first half.

It was a similar story at the start of the second half as Delhi continued to score tackle points and led 18-13 after 25 minutes. Hooda scored with a two- point raid in the 30th minute as Pune trailed 17-21.

Pune were slowly cutting Delhi’s lead as Suresh Kumar came up with a two-point raid in the 32nd minute. Pune inflicted an all out in the 35th minute to 27-25 and turn the tables on Delhi. In the last few tense minutes of the match, Pune held their nerve and prevailed 34-31.