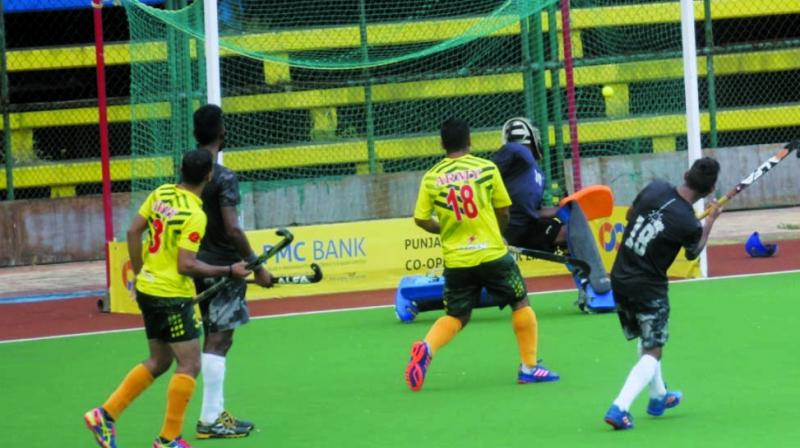 The Armymen managed to cut the lead when Chandan Aind, who also recorded a hat-trick, converted from a penalty corner in the 35th minute.

Indian Oil’s hard-working and enterprising right outer Sukhjeet Singh played a stellar role notching up a fine hat-trick. He scored from a field effort in the 20th minute and five minutes later he scored from an indirect penalty corner conversion to double the lead. The Armymen managed to cut the lead when Chandan Aind, who also recorded a hat-trick, converted from a penalty corner in the 35th minute.

After switching ends, Indian Oil continued to dominate play and struck three quick goals to take the match away from the Armymen. Roshan Minz scored in the 40th minute and four minutes later, Olympian Prabhjot Singh added the fourth before Sukhjeet scored the fifth and completed his hat-trick in the 52nd minute. Aind was successful from two more short corners in the 54th and 70th minute to help the Army outfit reduce the margin of defeat. In between those goals, Indian Oil skipper and Olympian Deepak Thakur scored the sixth in the 56th minute.

Indian Oil with nine points topped the Pool while Army XI finished second. Both progressed to the semi-final from this pool. Their opponents in the last four will be either South Central Railway or Punjab Police who meet in the final Pool-A league match on Saturday to decide who tops the pool.

Earlier in an inconsequential Pool-A match, BPCL beat Indian Navy 1-0 with Gurpreet Singh scoring from a firm drag flick in the 44th minute.

BPCL put up a better performance and held the upper hand throughout. They could have won by a bigger margin, but wasted quite a number of chances. Both the teams earned a total of a dozen penalty corners, but only one was converted by BPCL’s Gurpreet.