Born in Pune, based in Delhi and been around the country; Anju Khosla sets a record to inspire. 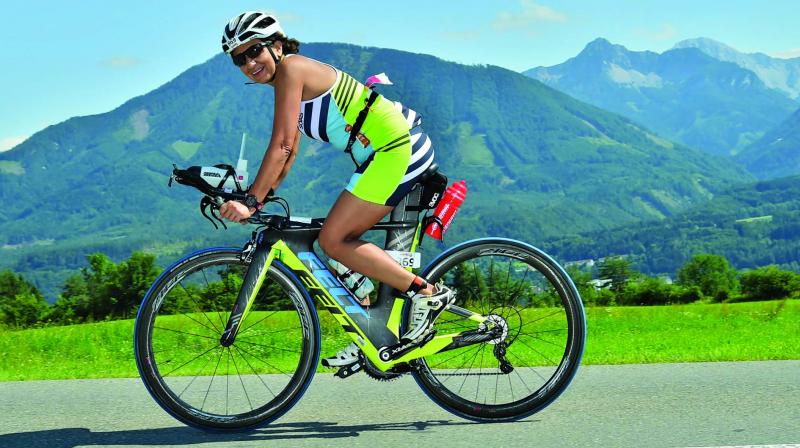 “You become more adaptable and you are willing to take challenges.” —Anju khosla

Her wedding chapter started in a fairly different way. The first day of Anju Khosla’s honeymoon was highlighted by a visit to a Bata showroom where she bought a pair of shoes for Rs 99.99 and added green and yellow glitzy laces to them.

This was 26 years ago, when  the couple was on  the way to Goa for their honeymoon. Even though Anju had an army background, her spouse Yogen Khosla, was initially the one with a bent  towards athletics. This story is, however, not convincing enough after her laudable feat on July 1. Anju successfully completed the Ironman Triathlon in Austria in 15 hours and 54 minutes to become the oldest (52) Indian woman to do so.

After being on the run for four quarters of the day, she tramped over the finishing line gasping, with one hand resting on her back and the other raising the Indian flag. The 52-year old trained for about 10 months with her coach Kaustubh Radkar in Pune.

She insists that it was the army background of her family that played an important role in this coup. Her father retired as a Lieutenant Colonel and her brother is serving in the army currently. The Ironman event entails a 3.8 km swim followed by 180 km of cycling and a 42 km run. All these events have a bond with her past. 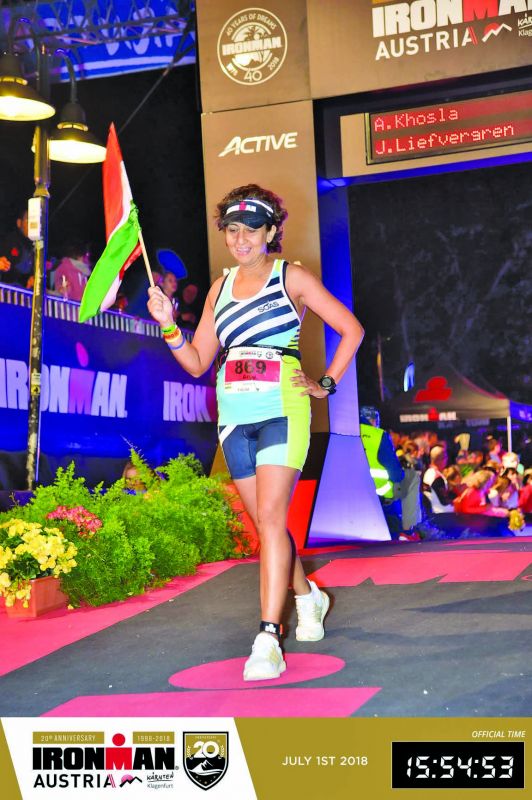 “It did condition my mind in some or the other way. You become more adaptable and you are willing to take challenges. I have been a passionate cyclist for about 10 years and being an army kid, it was easy for me to make my way across the pool as we were taught swimming very early in our age,” she says.  Born in Pune, her childhood was like any other army-kid’s. The list of cities that she has lived in goes into double digits. However, Anju’s triumph goes back to the Bata showroom. Her husband, Yogen wanted to go for a run on the scenic boulevards of Goa, but he did not want to do it alone. Mrs. Khosla recalls her army temperament boot in. “I always accompanied my father when he went to play squash and golf in the cantonment. I was always attracted to athletics and sports. So when my husband asked me, I was ready (to run),” as she says.

“I did not carry sports shoes and my husband was surprised to know that. The very first day, we went to a Bata showroom to buy shoes. It felt really nice after the run so I started getting into it. I did not compete though,” says Khosla who is a mother to two sons.

Anju was gradually getting into it. The running was on and off as she had two babies in between. “I developed cycling as a hobby.  For around 10 years, I have been cycling. So that was my plus point in this triathlon, but even then the roads were ticky in Austria. The streets were winding  and steep at times,” she explains.

In 2010, she went for a cycling expedition from Manali to Leh. “It was not mainstream then,” she says. This was followed by an endurance race of 500 kms in 24 hours from Jodhpur to Jaisalmer and back. In 2013, she entered her first triathlon in Delhi and gradually increased the distance. Eventually, her goal was to complete this event in Austria.

She went through painstaking training sessions in the last 10 months and went through different seasons. It was difficult to take out time from her job at finance company Capital Trust. So, the 52-year old would get up at 4 AM to find a way out of it. Her trainer in Pune updated the distances and routines on her smartwatch.

“At this age, you cannot motivate yourself to do something like this. He provided a structure for me to train,” she recalls.

Some may even find 52, the perfect age to retire, but Anju decides to change the stereotype. “Right now I am resting for a week or two after the triathlon but soon you might see me again,” she signs off.