The expert Maharashtra cyclist wants to add all the endurance race medals to his cabinet. What's keeping him from doing so? 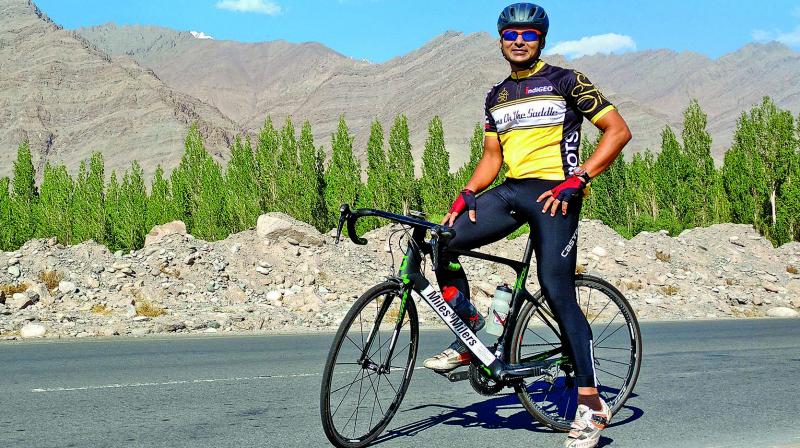 The thing about Samarth is that he has an irresistible knack of taking on challenges.

Almost a year ago, Amit found himself in the midst of the forests of America. Amit Samarth became the first Indian to complete the ‘Race Across America’ (RAAM)- an excruciating cycling race. He peddled around 12 states for 11 days. Apart from this and Tour de France, there is another grueling cycling expedition that requires absolute strength of character. Samarth will become the first Indian to compete in the Red Bull

Trans Siberia Extreme Stage Race that is scheduled on July 24 from Moscow.

If he is successful, he will become the fifth cyclist in four editions to complete the 9100 kilometer race.

The thing about Samarth is that he has an irresistible knack of taking on challenges. And most of the time, he is fighting against odds greater than physical capacities. A real life ironman, his muscles can handle a great deal of stress and his endurance levels speaks for the same. To fit the criteria, to just compete for the Trans Siberian, one needs to have a tough record. He certainly does with a RAAM certificate doing the talking.

The difficulty that he faces is of finding financial backing. Even last year, crowd funding and corporate aid allowed him to go for the RAAM. Likewise, even this year, he still lacks a sum of rupees four to five lakhs for the Trans Siberian Race. “People who know me and have faith in me have funded me.” The disappointment is much evident in his voice. “I am not doing it for any profits. I am taking a challenge and by the end of the day I don the Indian flag. Any kind of financial support would be appreciated but it’s not there,” says the Nagpur-based doctor.

Before leaving for RAAM, he even went to Delhi and knocked on the doors of the sports minister. He received a couple of letters, but they only dashed his hopes. One of the letters said his activity ‘does not fit in their programme’. “I did not even try this year. It’s a great waste of time. Even going there (Delhi) and coming back requires money,” he says.

The distance of Trans Siberian comes down to about 9100 kilometres, extending to seven time zones and five climates around several cities of Russia. He explains why  there is a need for so much money in a competition like this.

“Since it is around 25 days, you require extra gear. One pair of shorts costs me 14 thousand rupees. I need at least 10 to 12 of them. People don’t understand the need for these things but that is where the money goes,” he says. “There are so many conditions, it becomes difficult.”

Greater grit
Leaving these problems aside, he has been training for the past couple of months in different parts of the country. While his hometown, Nagpur, receives itsfair share of summer heat, he travelled North to experience higher altitudes. “Ladakh was important to train for higher altitudes,” he says.

He will leave for Russia on July 10 so that he can reach two weeks prior and adapt to the weather conditions there.

If he finishes this pursuit, the doctor will become the fifth cyclist in five editions to do so. When asked about giving a shot to Tour de France, he replied, “Yahan 10-15 lakh nahi mil rahe, how can I expect 15-16 crore for Tour de France.” Maybe his mettle will be limited to extreme endurance races.