Guided by same coach Fernandes, Riccha and Dev are living the dream to represent India in the second Jr. NBA Global Championship in Florida. 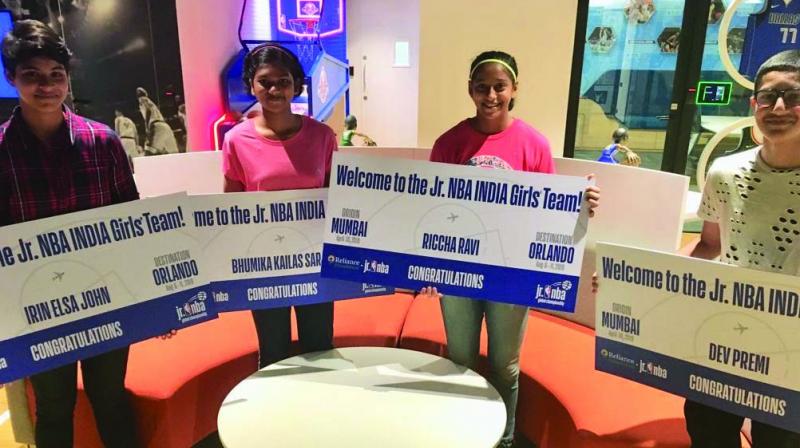 Riccha Ravi and Dev Premi from Vibgyor High School, Goregaon are excited to represent Indian girls and boys team respectively in the United States of America. They are among ten girls and ten boys who will represent India in the second Jr. NBA Global Championship, a youth basketball tournament for the top 13 and 14-year-old boys and girls teams from around the world.

The event will be held from August 6-11 at ESPN Wide World of Sports Complex at Walt Disney World near Orlando, Florida.

Both train under same coach Nelson Fernandes who has been a known name in local basketball, leading his school Vibgyor to many inter-school titles. Besides sharing coach both started playing basketball after taking cue from elder siblings.

Riccha got impressed from her elder sister Riya at the age of eight who then was a star player for her school. The 13-year-old is now an accomplished player regularly representing her school team and Maharashtra team in junior national events.

Currently she is in Coimbatore to represent Maharashtra in youth national championship.

“Though me and her father are (Finance) professionals but our household is full of sports. Riccha is a black belt in Karate and Riya plays judo also. Riccha is very keen on improving her basketball game and keeps practicing with coach Nelson and learning latest techniques by watching NBA on TV and Youtube videos,” said Riccha’s mother Radhika who is a banker and her husband a Chartered Accountant.

Dev also an accomplished player for his school and state youth team also took the game from his elder brother. “I started playing basketball after watching my elder brother Veer in action for school four years ago. Then I started playing for my school under coach Nelson Fernandes and got to represent Mahrashtra and also captained state U-14 team,” said 13-year-old Premi.

Both regularly follow NBA games and have their sights set on the visit to meet favourite stars and also feel proud to represent India. They covered the hard yards to come in 20 youth players, chosen following a two-day selection camp at the NBA Academy India in Delhi NCR. The camp featured 40 13- and 14-year-olds from the Reliance Foundation Jr. NBA Skills Challenges, City Competitions and National Finals.

“Her selection process involved two months with participants from 34 cities. She is now super excited to play there. She is inspired by LeBron James and watches NBA regularly to learn their techniques and understands the way they play. Besides being good defender she scores on rebounds and is keen to master three pointers like Stephen Curry,” Radhika revealed about Riccha.

Dev whose target is to play in the NBA is looking forward to make good friends on his first US visit. “My competition is with self. I want to be third Indian origin player after Satnam Singh and Sim Bhullar to play in NBA. My dream is also to play for India and it a matter of pride for me to represent national youth team in US. It will be my first time in US so I am looking forward to make good friends and meet favourite NBA stars. Having watched the NBA regularly here I have good knowledge of players there,” Premi concluded.