“Strong boxers from Uzbekistan and Kazak-hstan will be in fray,” Hussamuddin added. 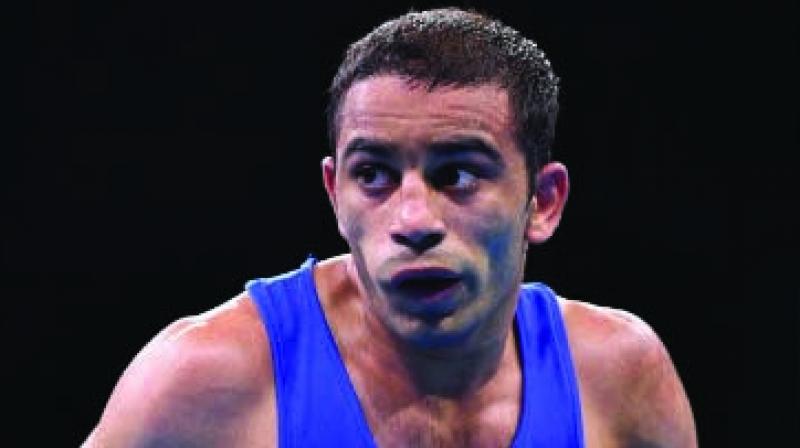 Mumbai: Boxers Amit Panghal (49kg) and Mohammed Hussamuddin (56kg) are confident of doing well at the Asian Games after their medal-winning feat at the Commonwealth Games.

With medal hopes mostly pinned on seniors Shiva Thapa, Manoj Kumar and Vikas Krishan plus young Gaurav Solanki raising hopes after winning gold medals at the CWG and the Chemistry Cup, Panghal, Hussamuddin along with Dheeraj Rangi have less pressure in their maiden Asian Games appearance.

Rohtak-based Panghal claimed silver at the CWG in April and is determined to win gold at Jakarta.

“When I got the silver at the CWG, I had a warm welcome at my village. My feat inspired new boys to take up boxing and they told me if you win at the Asian Games we will get more encouraged,” said the 22-year-old.

“I haven’t won gold yet at that level, but I am confident of winning.” Hussamuddin clinched his first career gold at the international level in bantamweight category in June at the Chemistry Cup in Germany. The 23-year-old Nizamabad boxer had claimed bronze at the CWG.

The duo, along with other the Asian Games-bound boxers, had a 15-month training session in the UK with the England men’s team. They then returned to India on August 1 and started training at NIS Patiala.

Though the boxing events start from August 24 at the Asiad, the Indian contingent left for Indonesia early and will train with Indonesian boxers for a week.

The young boxers know the Asiad will be tougher than the CWG but they are ready for the challenge. “Chemistry Cup is regarded as one of the best competitions in Europe but in Asian Games their will be better boxers compared to CWG.

“Strong boxers from Uzbekistan and Kazak-hstan will be in fray,” Hussamuddin added.