More challenges for U Mumba

Eyes will be on U Mumba as they have a chance to improve their game in the challenge, which will be held in Ahmedabad and Lucknow. 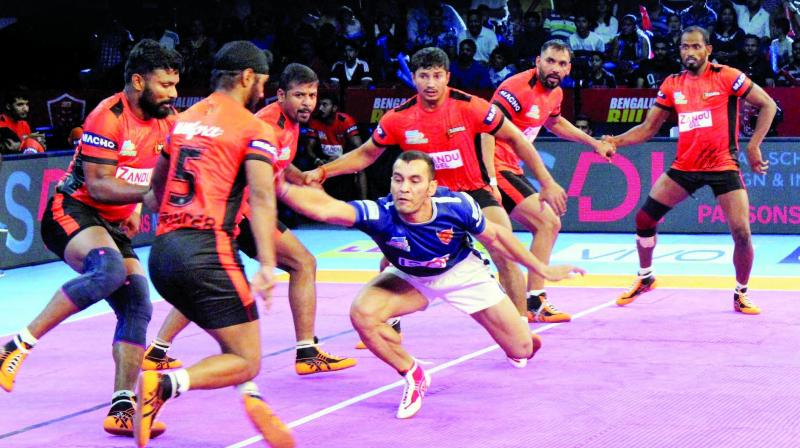 Gujarat defeated Anup Kumar-led U Mumba in the last match 39-21 on August 11.

U Mumba, currently in the third place in Zone A, will attempt at upping their game after the Pro-Kabaddi League enters the all new Inter-Zone Challenge week in Ahmedabad and Lucknow. Teams from Zone A and Zone B will go head-to-head against each other for the first time in 12 gripping matches. In all, there will be three Inter-Zone Challenge weeks during the course of Pro-Kabaddi League season 5, wherein each of the six teams from a zone will play the other six at least once.

The Season 2 champions, who have 10 points from four matches, will look to improve their points before they reach home on August 25. Puneri Paltan, who defeated U Mumba in the opener, have 11 points after three matches. New franchise, Gujarat Fortunegiants (GFG) is at the top of Zone A with 23 points in six matches. Gujarat defeated Anup Kumar-led U Mumba in the last match 39-21 on August 11.

After suffering a crushing defeat at the hands of Gujarat, Anup admitted that their plans failed against the marauding team. “We made lots of mistakes in crucial stages of the game that eventually contributed to an 18-point loss. Our plans failed and it was a bad day for us. But then again, everybody has one of those days,” he said. “The delayed tackles affected us and our raiding side was not on par either. Everyone has a skill set that they utilise and want to win with but sometimes, even with practice, those skills are not up to the mark,” Anup added.

U Mumba will kick-off the Inter-Zonal Challenge against debutants U.P. Yoddha on Friday, followed by Telugu Titans clash on Saturday in Lucknow. U Mumba will try to use the opportunity to stake an early claim for a spot in the play-offs. “We played really well against Dabang Delhi (DD) and beat them by 14 points. We played as badly against GFG and hence lost. The losses have hurt the team but we will re-group, train harder and come back stronger,” Anup said. “Our team is a well balanced unit. Our aim now is to learn from our mistakes and then take it forward from there. We want to bounce back as a team and we will!” he added.

With enthralling match-ups lined up, the race to the top will only gather heat as the tournament proceeds further.

Pro-Kabaddi stalwarts Jaipur Pink Panthers would like to get their mojo back as they take on Zone B leaders Bengaluru Bulls. The Gujarat Fortunegiants would look forward to making the most of their home advantage against southern rivals, Telugu Titans. “With these and more, we have a handful of salivating prospects on our hands waiting to entertain the Kabaddi enthusiasts in the heart of Gujarat and the city of Nawabs,” he concludes.