Hima Das a winner in any language

Das glorious win was quickly followed by wishes pouring in from all corners. 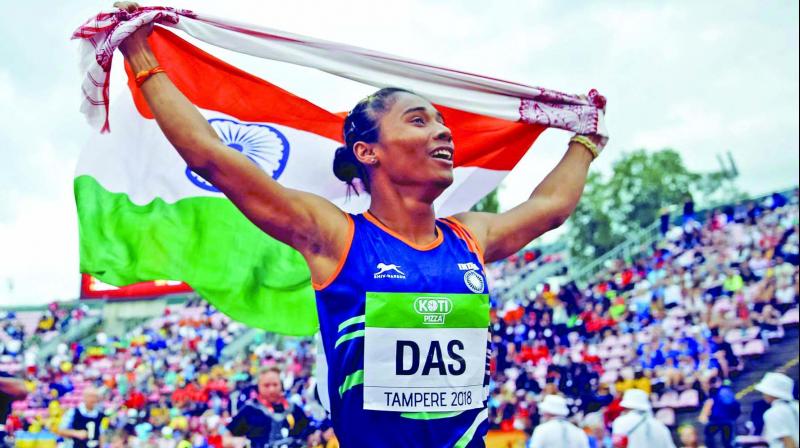 The teenager Hima Das ran at lightning speed and scripted history in becoming the first Indian woman to win gold at the IAAF World Under- 20 Athletics championships on Thursday. She claimed the top spot in the women’s 400m final race in Tampere, Finland with a timing of 51.46s. Her glorious win was quickly followed by wishes pouring in from all corners.

But the Athletics Federation of India caused quite a stir in the social media after it made a reference to Hima’s “not so fluent English”. “#HimaDas speaking to media after her SF win at #iaaf-tampere2018 @iaaforg Not so fluent in English but she gave her best there too. So proud of u #HimaDas Keep rocking & yeah, try ur best in final!” the AFI wrote on its Twitter handle.

The daughter of a rice farmer from a village in Assam’s Nagaon district had already managed to gather a humongous fan following on the social media platforms post her impressive victory and the fans were quick to turn to their twitter accounts condemning the governing body for its insensitive comment. The miffed fans even ridiculed the tweet and reminded AFI that Das was in Finland to showcase her talent in athletics and not her command over English.

The severe backlash forced the AFI to issue an apology and that too in chaste Hindi. “We apologise to the country if our tweet hurt sentiments. We merely wanted to show that Hima is fearless whether on the track or outside,” the clarification read. Despite being from a small village, she spoke freely with the foreign media. We apologise again to those who were offended,” translated a tweet which was posted in Hindi by the AFI.

Narendra Modi@narendramodi
India is delighted and proud of athlete Hima Das, who won a historic Gold in the 400m of World U20 Championships. Congratulations to her! This accomplishment will certainly inspire young athletes in the coming years.

Amitabh Bachchan@SrBachchan
T 2865 - CONGRATULATIONS .. #HimaDas, the first Indian Women to win a GOLD in World Athletic track event EVER ! INDIA is proud of you .. you have given us reason to hold up our heads HIGH ! JAI HIND !!

Sachin Tendulkar@sachin_rt
Your 51.46 sec dash and years of hard work has paid off,#HimaDas. Many congratulations on winning Gold at the World U20 athletics championship. This is just the beginning of a new era. Many more to come. Keep up the hard work! #GoldenGirl# DreamsComeTrue

President of India@rashtrapatibhvn
Congratulations to our sensational sprint star Hima Das for winning the 400m gold in the World Under-20 Championship. This is India’s first ever track gold in a World Championship. A very proud moment for Assam and India, Hima; now the Olympic podium beckons! #PresidentKovind

Virender Sehwag@virendersehwag
Wow! So proud of you Hima Das. Incredible, historic achievement on becoming the first Indian track athlete to win a medal at any global event winning Gold at women’s 400m World U-20 Championships clocking a time of 51.47 seconds. Thank you for the happiness.