National racing: Ashwin Datta extends gap at top in round 3 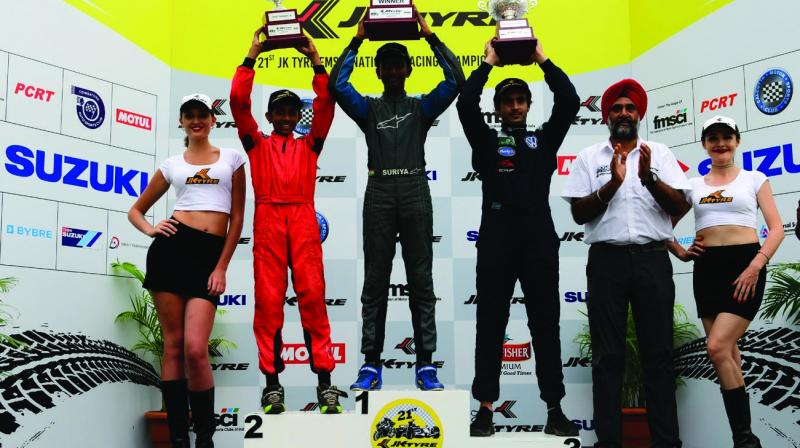 Novice Cup winners pose with their trophies after Round Three of the 21st JK Tyre FMSCI National Racing Championship in Coimbatore on Sunday.

COIMBATORE: Chennai Ashwin Datta inched closer to his maiden Euro JK title in the 21 st JK Tyre FMSCI National Racing Championship with a six-point lead over second-placed Karthik Tharani at the end of the Round 3 here on Sunday.

Ashwin, who had a slender lead of two points before the race started, capitalised mainly on Nayan Chatterjee’s failure to finish the race to widen his lead. Ashwin has 74 points while Karthik Tharani is in second position with 68 points,

The LGB Formula 4 too proved to be topsy-turvy but Vishnu Prasad (59) managed to keep his nose barely ahead despite not having the best of weekends.

Delhi’s Rohit Khanna seemed to be cruising ahead after winning the first race on Day 1 and starting Day 2 with another victory. However, a series of incidents led to a number of protests, that saw him being penalized by 20 seconds and slip down from No. 1 to 13.

Joseph Mathew continued his superb form in the Gixxer Cup as he beat Malsawmdawngliana in a thrilling finish. Joseph, who is unbeaten, started with caution as he let  Malsawmdawngliana to dictate terms. However, the Chennai rider outwitted him with a close margin of .087 seconds to claim another title.

The JK Tyre Novice Cup too saw a dramatic turn of events, which led to Surya Varathan claiming the championship and Tijil Rao taking the second place.

Hashim EKP, who had won all three races over the weekend to move ahead, was disqualified as he had contravened the competition norms.