Hamilton, Bottas now far ahead of the pack

History has recorded that generally the driver/team that drew first blood went on to win the championship. 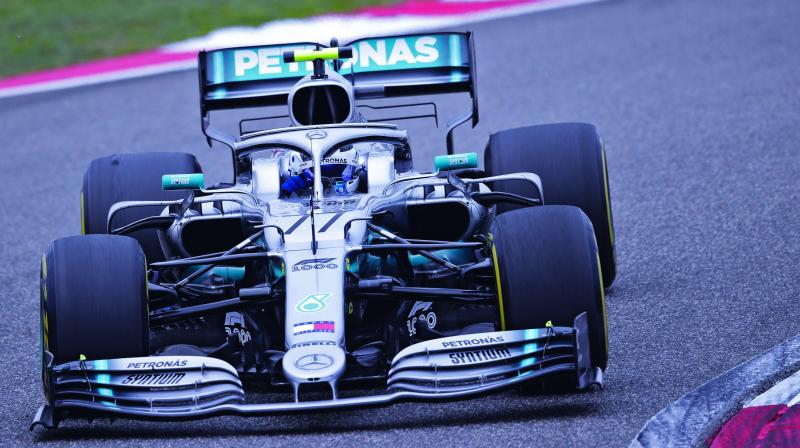 Mercedes’ Valtteri Bottas in action during the Chinese Grand Prix in Shanghai on Sunday. (Photo: AP)

The year 1950 launched an era of motorsport in the form of Formula 1 which required a unique skill set, coupled with athleticism that drained energy both physical and mental. And in the following few decades made legends that not only battled each other like gladiators but faced death as collateral damage. Recent years have brought in drastic changes and safety features to bring squeamish spectators back to the telly and tracks. While it has mellowed down the game quite a bit it has been accepted albeit with a sense of regret. While the adrenalin rush is not that intense the technicality of the game has brought in a new evolved fan to make up the dwindling numbers.

The 1,000th F1 event in Shanghai was a stage set for a battle royale between the two majors Mercedes and Ferrari but the former had other plans. The scare that they received in Bahrain sent them back to the drawing board and in the two weeks between the races they came back to destroy the Scuderia effortlessly. They probably had further reserve fire power under their belt to deal with and late surprises, pit or tire strategies that Vettel and Leclerc might have had up their sleeves.

Hamilton and Bottas have both got used to winning and it will take a lot to rattle them of their perch. Qualifying at pole and second was enough to put them in a comfort zone but a poor start from the latter saw Hamilton take off like a hare and never to be challenged during the entirety of what turned out to be an humdrum race. Add to this the fact that his able teammate inadvertently playing shotgun that resulted in Ferrari fighting for 3rd and lower.

Leclerc quickly learned how this sport can deal some cruel blows when he lost his race from an almost certain winning position in Bahrain to a lowly 5th in China behind the other talent Max Verstappen in his Honda powered Redbull  but way ahead of Gasly  in 6th. Disappointments early in his life will only make him a stronger and consistent champion in the next decade or so that he has available to showcase his talent.

His race-craft belies the fact that he is only at the end of his teens.

But what hasn't changed and probably never will is the performances divide between the top 3 teams and the rest is what make a worrying fact for F1. What TV broadcasts have cleverly stooped showing are the number of laps the slower cars are running behind.  Anyhow the battle that goes on down the line below the top 6 and amongst the rest 14 keeps their respective fans cheering. So be it.

History has recorded that generally the driver/team that drew first blood went on to win the championship. Ferrari may want to prove otherwise. It isn't that much off the pace and once the circus moves to Europe in May we can hope to see a reversal of fortunes.

Sergio Perez finished a creditable 8th for Racing Point in his erstwhile Force India car. Hamilton and Bottas have surged ahead in points in just the 3 races
but the battle for 3rd remains intense with Max (39), Vettel (37) and Leclerc (36).