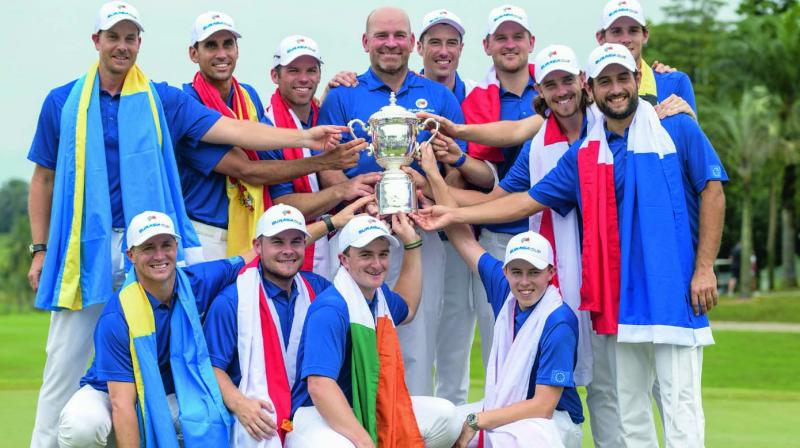 Team Europe pose with the trophy after winning the Eurasia Cup tournament at the Glenmarie Golf and Country Club in Shah Alam, near Kuala Lumpur, on Sunday. (Photo: AFP)

Kuala Lumpur: Europe came from behind to defeat Asia 14-10 and retain the EurAsia Cup title on Sunday, in a boost for captain Thomas Bjorn as he gears up for the Ryder Cup.

Bjorn’s side entered the final day of the tournament in Malaysia trailing Asia by one point but put on a masterclass in the singles, winning eight out of 12 matches.

It was a disappointment for Arjun Atwal’s men, as Team Asia had ended the first two days of the event — which featured foursome and fourball matches — with a slim lead.

Europe thrashed them the last time it was held in 2016 while the inaugural 2014 edition ended in a tie.

Europe dominated from the start Sunday and their winning point came when Belgium’s Thomas Pieters defeated South Korea’s An Byeong-Hun in a hard-fought match.

Bjorn hailed his side’s victory in the $4.8 million event: “It was a great performance today from every single one of them. There was a determination and a will of wanting to win this.”

Despite the loss, Atwal said he was “very proud” of his team.

“They are all awesome players, it’s just unfortunate that we ran into a buzzsaw today,” he said.