Bengaluru Blasters got off to a sound start as they led the Hunters after three matches to put pressure on the local team. 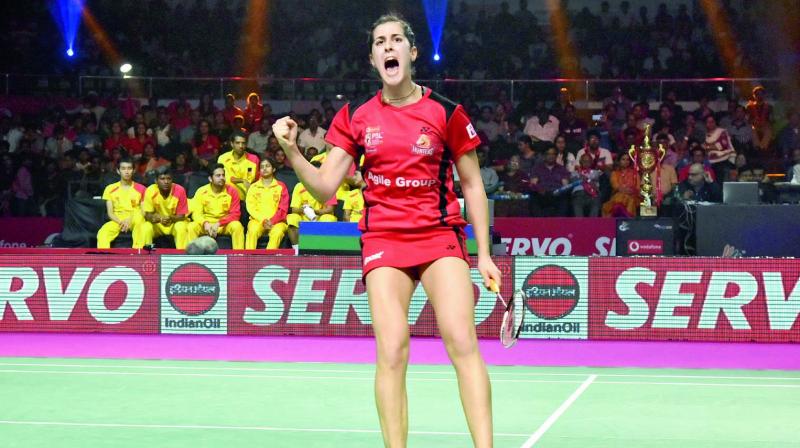 Hyderabad: Hyderabad Hunters emerged champions of the third edition of the Premier Badminton League, after beating Bengaluru Blasters 4-3 in a pulsating final here on Sunday night.

The tie went down to the wire. In the decisive mixed doubles, Pia Zebadiah and Satwiksairaj Rankireddy defeated Kim Sa Rang & Sikki Reddy 15-11, 15-12 to set off celebrations at the Gachibowli Stadium.

Earlier, after a dominating start from Bengaluru Blasters, Carolina Marin brought the Hunters back into the game after subduing stiff competition from Kirsty Glimour. Marin, with her brilliant smashes and a solid attacking game, brought the crowd on their feet after beating Gilmour 15-8, 15-14.

Earlier, Bengaluru Blasters got off to a sound start as they led the Hunters after three matches to put pressure on the local team.

Bengaluru cornered Hyderabad after riding on a scintillating performance from Viktor Axelsen who completely demolished local lad Sai Praneeth 15-8, 15-10 to put his side 3-2 to silence the partisan crowd.

In the second men’s singles of the night, which was also the trump match for the Blasters, Axelsen opened up a 4-2 lead. The Dane then banked on repetitive errors from Praneeth to pocket the first game 15-8.

Meanwhile, Hyderabad who were outclassed in the first match, heaved a sigh of relief when Lee Hyun Il clinched a straight games victory over Subhanker Dey.

The home side suffered an early setback when Markis Kido and Yoo Yeon Seong were outclassed 9-15, 10-15 by Boe Mathias and Kim Sa Rang in the men’s doubles.

However, in the second match, trump for Hyderabad, experienced Korean Lee Hyun looked determined from the start and swept past Shubhanker in straight games.