Ashwin, who started from third position, used most of the situation to clock the fastest lap time of 1:01.422. 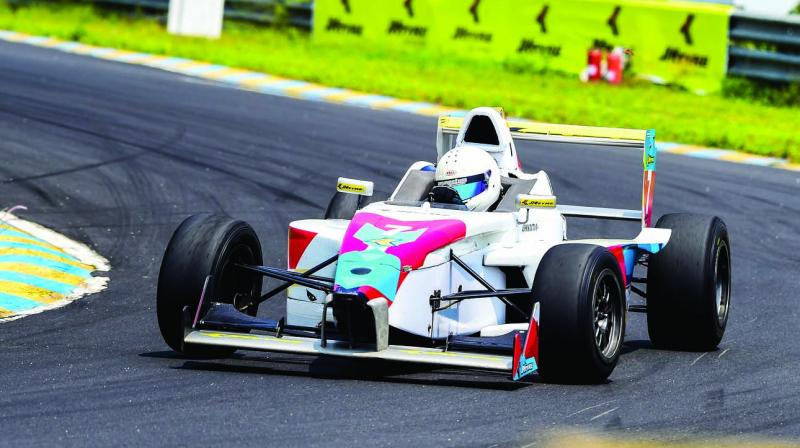 Ashwin Datta in action in Coimbatore on Saturday.

In the Suzuki Gixxer Cup, which was also high in adrenaline, Joseph Mathew extended his unbeaten run, winning his fifth straight race, to lead the championship. Earlier hoping to topple championship leader Ashwin, Mumbai’s Nayan Chatterjee started brightly by claiming the pole position with a slender lead of .316 seconds than Ashwin. However he wasted the golden chance with a slow start. Later in the race, the Mumbai racer had to quit as he and Karthik Tharani caught in a tangle midway, forcing them off the tarmac.

Ashwin, who started from third position, used most of the situation to clock the fastest lap time of 1:01.422.

“I am happy to have been able to hang on to my lead. I knew before the start of the race that I had to be calm and grab my opportunities,” Ashwin said after the race.

In Race 2, with the reverse grid for the top six coming into play, young Yash Aradhya started on pole. Yash made the most of the opportunity to build a sizable lead; but he slipped out of contention due to another minor collision.

Karthik Tharani jumped at the chance to win the race while Nayan Chatterjee, racing in a hit car, finished third to keep his Championship chances alive. Joseph Mathew reigned supreme in the Suzuki Gixxer Cup once again, claiming another facile victory. He was followed home by Malsawmdawngliana and Sachin Chaudhary.

“I had a great day winning my fifth straight race of the season. It was not an easy day to race as there were lot of crashes that happened on the track and I had to really focus hard to get over the line,” said Joseph.