India are fielding a team rich in experience with a few youngsters in Dilpreet Singh, Simranjeet & Vivek Sagar Prasad, all of whom have shown promise. 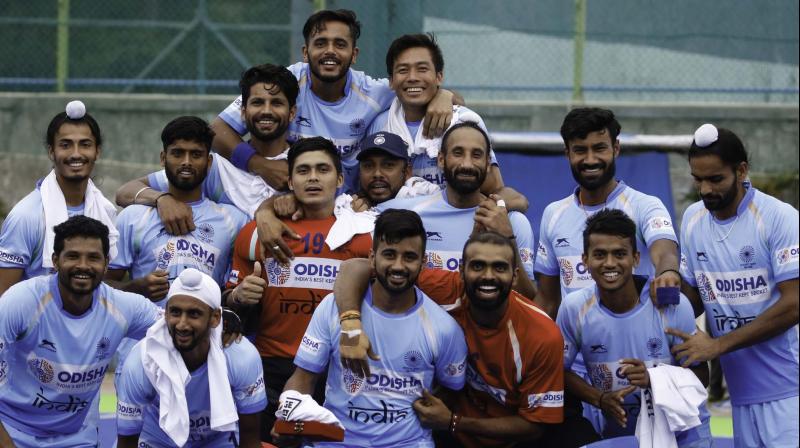 Senior pro S.V. Sunil, who was also a part of the 2014 high, believes the tournament provides a great chance to register their names in history books.

New Delhi: “Winning the ticket to Tokyo” is the mantra of the Indian men’s hockey team, who are looking to defend their gold at the upcoming Asian Games in Jakarta and Palembang.

The winners of the Asian Games get a direct entry to the Olympics and Sreejesh P.R. and his men are ready to bag the twin feat — a gold and with it, a smooth passage to the 2020 Tokyo Games.

As the team touched based in the capital ahead of their departure to Jakarta where the World No. 5 team will be the overwhelming favourites ahead of Pakistan, Japan, Korea, Malaysia and others, the team’s energy and confidence shone through.

The 18-strong squad underwent their final round of training at the Major Dhyan Chand National Stadium here on Monday morning.

Skipper Sreejesh, who has often ranked his 2014 Asian Games gold-medal winning performance as the best of his career so far, now has the dual task of mentoring the team and also keep bringing up those famous saves that he is known for. In 2014, goalkeeper Sreejesh had made two crucial saves in the penalty shootout against Pakistan in the final, guiding India to a gold after 16 years. Said Sreejesh here, “I think it’s a huge thing that we are going into the Asian Games as defending champions. It doesn’t happen every day.

“As a captain, I take it as a responsibility and also a great opportunity. I have  fond memories of that 2014 match and this time as a captain, I want to make it even more special. We have trained really hard and want to take the graph up ahead of the World Cup at home this year.

“Personally, this could be my last Asian Games and I am very determined to go all out. On September 1, we want to stand on the podium with a ticket to Tokyo in our hands. So that’s our aim.”

Senior pro S.V. Sunil, who was also a part of the 2014 high, believes the tournament provides a great chance to register their names in history books.

“We only have three Asian Games gold till date and to go and defend a title is special. It will be a rare double if we manage to do it,” the versatile striker says.

India are fielding a team rich in experience with a few youngsters in Dilpreet Singh, Simranjeet and Vivek Sagar Prasad, all of whom have shown promise.

A lot of emphasis will be on Sunil to guide the attack, who have come under some criticism recently. Sunil says it is time to change those “near misses” into “goals”.

“Yes, we understand that we need to change that and make sure that the defence doesn’t get into pressure. It is important to score consistently and we are pushing the youngsters to go for that extra effort inside the circle,” says Sunil, who has played more than 200 internationals.

Manpreet Singh, a vital cog in the midfield, says they will not take “any team lightly” and “will look to put up a dominant performance”.

“As a team, we were really hurt by the Champions Trophy final loss to Australia and that taught us how fine the win-lose margin is,” Manpreet said.

“We cannot be complacent after taking the lead and cannot let go even it’s 59 minutes on the clock and we are leading. The onus will be to score big and dominate the opposition.

“As for my own game, I am a risk-taker and like to play in an unconventional manner. That has always been my strength and I will continue in the same manner at the Asiad.”