Mixed emotion for Usain Bolt as he bows out of athletics

Bolt career ended in dramatic fashion when he pulled up with a hamstring cramp halfway through his anchor leg in the 4x100m relay. 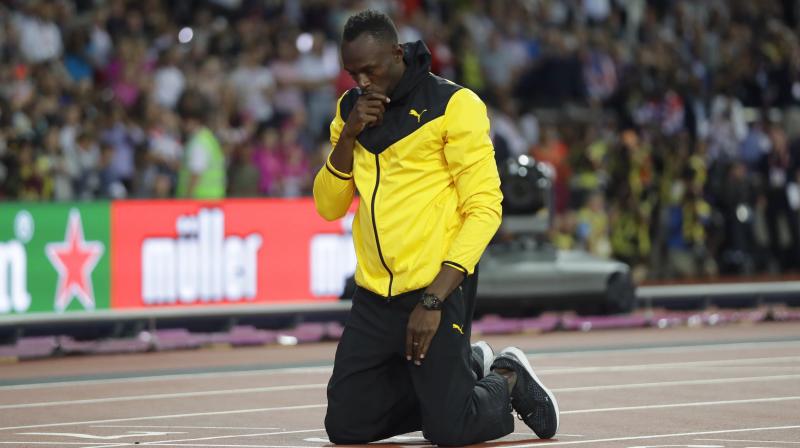 Bolt insisted that there would be no comeback."No! I've seen too many people return and come back to sport and shame themselves," he said with a wry smile. (Photo:AP)

London: Jamaican Usain Bolt said Sunday he was sad but also excited to bow out of athletics, adding that his disappointing world campaign in London would not change his career achievements.

Bolt brought down the curtain on his glittering career in dramatic fashion when he pulled up with a hamstring cramp halfway through his anchor leg in the 4x100m relay.

That meant his final competitive race finished without a medal, Bolt having sealed a bronze in the individual 100m behind American duo Justin Gatlin, who has served two doping bans, and Christian Coleman.

"It's been a rough couple of days," admitted the 30-year-old."I always tried my best 100 percent all the time and put on a good show."I'm sad to be walking away now.

"I don't think one championships is going to change what I've done in this sport."

Often compared to American boxing great Muhammad Ali by IAAF president Sebastian Coe for not only his sporting prowess but also the charisma and larger-than-life personality he brought off-track, Bolt made the same link in a final press conference Sunday.

"I remember after losing the 100m, someone said to me: 'Usain, don't worry, Muhammad Ali lost his last fight also so don't be stressed about it'.

"I've proven myself year in, year out," said the Jamaican, world record holder in the 100 and 200m, winner of eight Olympic golds and 14 world medals since making his debut in Helsinki in 2005 when he finished eighth and last in the 200m final.

Bolt insisted that there would be no comeback."No! I've seen too many people return and come back to sport and shame themselves," he said with a wry smile.

"I won't be one of those people."I am looking forward to being free. It's exciting, I'm happy. "My whole life has been track and field since I was 10. All I know is track. I need fun and to relax a little bit."

When asked what his legacy would be, Bolt spun a line that will be music to the ears of Coe and all at the IAAF, his potential new employers as both parties seek a mutually satisfying position to incorporate the Bolt brand for the advancement of track and field.

"Continue trying in anything you do, it's a good message to the kids," he said. "Work hard, stay strong and push on.

"If you do that, you can be the best you can be. That's a good legacy to leave." Turning to his disappointing 100m outing, Bolt said: "The whole champs has seen bad luck for certain athletes. It has been a surprising championships with lots of shocks.

"It is just the championships, not to do with me personally. I am always going to leave everything on the track. Everything happens for a reason; I don't know why it happened but it has."

And with no mention of newly-crowned 100m champion Gatlin, Bolt signed off with a word on athletes who abuse drugs in sports and what the message to children should be.

"I have always been strong on doping," he said. "I've said it, athletes should get life bans if you go out of your way to cheat an athlete.

"The sport is now on the way back up and we have to do everything to keep it in a good light. I've shown that you can do it without doping so that's what I hope the young athletes will take from it."