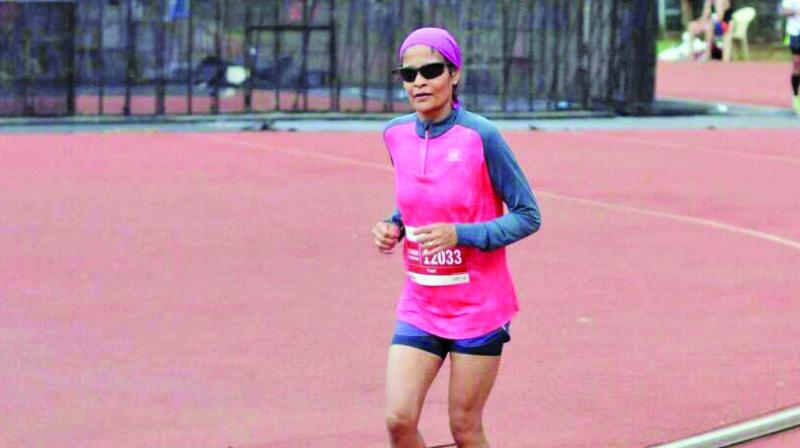 Preeti has been participating in marathon events for the past four years, Pinkathon 2014 being her first long run.

Preeti Lala, a 42-year old Social Science teacher from Thane and mother to a 19-year old daughter, changed the social perception of women on June 11, 2017. She secured the first position in the 12-hour Stadium Run held at the University Stadium Ground, Marine Lines on Sunday.

IDBI Federal Life Insurance organised the run which saw 695 participants counting 35 ultra marathoners with other enthusiasts. It saw 475 male and 220 female participants with 65 runners set to touch the target of 12 hours.

The winner was judged on the maximum distance covered in 12 hours where Lala successfully covered 89.20 kilometres. After running 223 laps of 400 metres to complete this vast distance, she said, “Honestly, I was not expecting to be number one on the podium. I saw many professional, ultra-runners around me, but I was just determined to run for 12 hours and nothing else.”

A woman is a mother, a daughter, a sister, a wife, a colleague, and a friend. She plays so many roles, and efficiently multitasks doing each job the best she can, be it her office work or taking care of her family.

“I want to encourage all women to come out and participate in such events and break all stereotypes. It is an empowering thing for us. All of us should give running a shot,” states Preeti, emphatically.

Preeti has been participating in marathon events for the past four years, Pinkathon 2014 being her first long run. She recalls “I started with Pinkathon in 2014 and since then I have been motivated towards running, it has grown on me over the years. I enjoy running. This has been my biggest race ever, and I am very proud of it.”

Preeti asserts that her family has always encouraged her. “My husband who is also a marathoner motivates me to take part in such events; he was the one who registered me for this Stadium Run.  My daughter was excited when she saw me with the trophy,” she says.

After being asked about how she builds her stamina and endurance, Preeti said, “I am a Yoga teacher, and practise it every day which helps me build my strength and control my breathing for such long runs. In fact, the next morning I had no fatigue at all. I got up at 5:30 am and went about my daily routine,” she signs off with a smile.