Aiming for a perfect serve

21-year-old table tennis player Siddhesh Pande from Mumbai has been selected to prep for the 2024 Olympics. 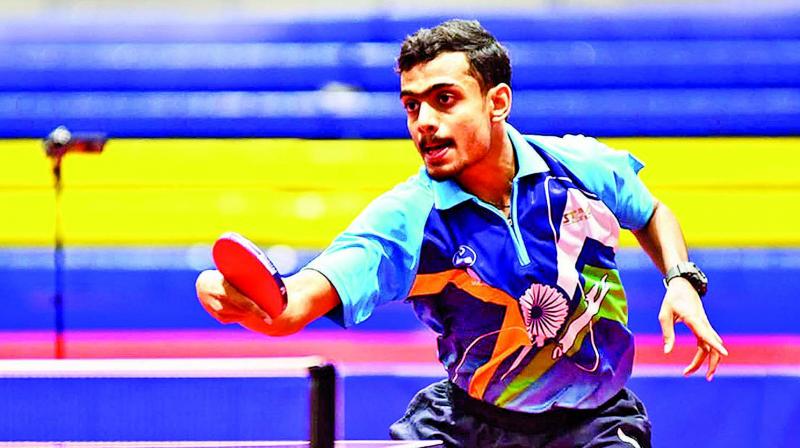 At the age of eight, when most kids don’t even have a hold of their books, Siddhesh Pande was effortlessly playing table tennis. It took little time for his father to hire him a coach to sharpen his skills, and now, more than a decade later, the 21-year-old is all set to represent India at the 2024 Olympics. If all goes well, that is.

The young athlete and 15 others have been selected amongst India’s elite athletes to prepare for the 2024 Olympic Games in the Men’s Open Category. “It’s a pleasant feeling. Although it is too far about what I will be getting out of this opportunity but securing the name in top 16 is encouraging,” says Siddhesh, who is awaiting his result for the final exams of Bachelors in Management from S. K. Somaiya Degree College.

“I couldn’t appear for the final exams as I was playing abroad, and I sat for the exams in the second term,” the player adds.

He is selected as part of an initiative by the Government of India, wherein selected candidates will be given adequate resources for advanced training in their respective sports, including financial assistance to practice and perform better at the 2024 Olympics. “There will be many things covered under this initiative which will help us advance our skills on the sport,” he explains.

With some excellent performances in past national and international arena tournaments held in Guwahati, as well as open tournaments under the International Table Tennis Federation (ITTF) in Slovenia, Croatia and the Czech Republic,  Siddhesh recently came back to India after playing at Indonesia Open International Tournament. “The 2020 Olympics are the primary focus, but by 2022 it will be clear what is expected of me as a player and what the initiative has to unfold,” he elucidates.

Having been on the Indian circuit for last three years, Siddhesh’s ranking in the Men’s category has gone up on both, national and international levels. The athlete believes that it is because of his rankings he has managed to secure his name in the list. “My rankings have played a big role in why I am getting opportunities to represent India on multiple platforms,” he shares, adding that as of now his primary focus is to maintain his rankings to be eligible to play in Olympics 2024. “My current goal is to keep my rankings stable and take them high in men’s category in national and international levels,” he adds.

Coached by Shailaja Gohad, the athlete has already won several medals and this selection is the outcome of his determination and hard work. According to the player, he practices table tennis daily, for at least six hours. “I play every day and my coach helps me a lot,” he says, adding that his father — an engineer in the Indian Railways — and mother — a lecturer at a junior college — have always encouraged him to pursue his dream. “In a way, I am blessed. My family has always been supportive. They never stopped me from doing anything that I wanted and they supported me to pursue my career in table tennis,” he smiles.

As for his future plans, the young athlete reveals that he is soon to head to Germany for a few months to better his skills. “I will be playing with some trained and senior players and will be participating in some tournaments,” he says and reveals that he has decided to make his career as a table tennis player. “I have taken sports very seriously from the beginning and I have taken this early call that I want to be a player,” he adds.

In addition to achieving his dream, Siddhesh has withdrawn his name from regular studies and will be taking up some open education programs. “This is a big decision to make since I am good at studies as well. But I have to choose one, and I would go with my game,” he says in conclusion.