The 2019 edition of the gruelling endurance rally will take place entirely in Peru for the first time. 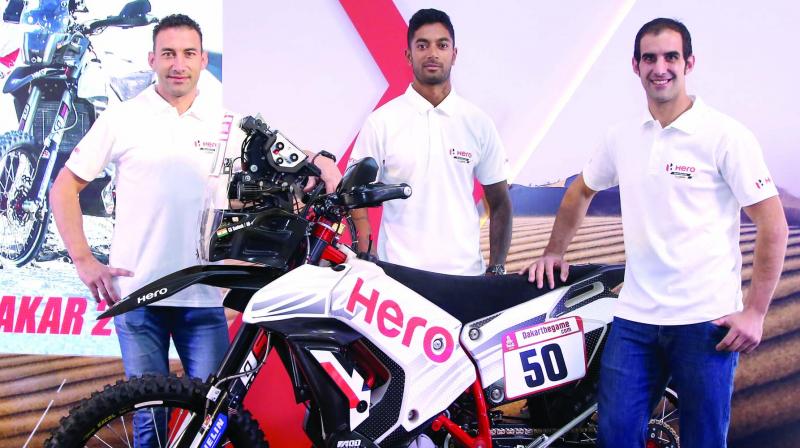 Hero MotoSports Team Rally’s ace riders Joaquim Rodrigues (from left), C.S. Santosh and Oriol Mena at the team presentation ahead of the Dakar 2019 in New Delhi.

New Delhi: Ace biker C.S. Santosh is gearing up for his fifth Dakar Rally and third with the Hero Motosports Team, but the Bengaluru boy is not putting any “extra pressure” on himself and his only focus is to deliver a better show this time.

“My aim at Dakar this year is to do better what I have been doing. Last year I had two good stages. I was in the top-50. It is a dream to finish in 20s this time. But I don’t put pressure on myself… I just want to complete my race every day and give my 100 per cent. I want to minimise my mistakes,” Santosh said.

Santosh along with Portugal’s Joaquim Rodrigues and Oriol Mena from Spain were named in the three-member Hero MotoSports Team for the 41st edition of the Dakar Rally slated to begin from January 6. All three will ride on the Hero 450RR rally bike. “We three are different from each other. Mena is a beast for me. He is like the hulk while Joaquim is a professional and very experienced. There is a contrast between these two guys. I try to learn as much from my team-mates. They are the top riders in the world and having them as my team-mates is a big thing for me. They help me achieve my goal. I learn a lot from them. They have been very helpful,” he said.

The 2019 edition of the gruelling endurance rally will take place entirely in Peru for the first time. The route is a 5,000 km coil, beginning and ending in Lima. The race will take place over 3,000 km in 10 special stages, and 70 percent of the event will be on the sand.

“Toughest thing in Dakar is unpredictability. We never know how the conditions will be like. You can’t prepare for Dakar as you prepare for close circuit motorsport as you know the conditions and you have done the laps before so you have exact expectations where you need to be in terms of performance but in Dakar it’s is really difficult to gauge your performance level. Unknown is a big factor in Dakar,” said the 35-year-old.

Asked what inspired him to go for Dakar — one of the most gruelling rallies on earth — again and again and that too after meeting so many life-threatening crashes, the lanky rider said, “The element of fear is always there when you are in Dakar but the fear is not hurting yourself but not achieving the desired result rather anything else. I say all the time that I participate in Dakar to fulfil my own potential… whether I am finishing Dakar in 50th position or 10th ...it is just a number for me. I want to achieve my own potential and if I can do that I will really happy.”