The 31-year-old went on to take the next as well to lead 4-3 before the Singaporean fought back crafting breaks of 86 and 53. 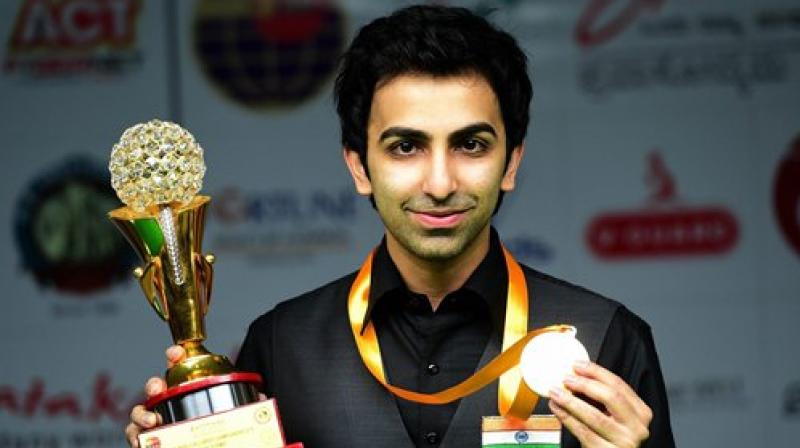 Cue player Pankaj Advani pose with the trophy after winning against Peter Gilchrist of Singapore during the World Billiards championship 150-Up finale 2016 at Karnataka state Billiards Association in Bengaluru. (Photo: PTI)

Bengaluru: It was a sweet victory as Pankaj Advani won his 16th World title in front of his home crowd, defeating Peter Gilchrist in the Points Format of the IBSF World Billiards Championship at the Karnataka State Billiards Association on Monday.

The duo notched up easy semifinal wins to set up a mouth-watering final clash and it lived up to its billing. In a rematch of last year’s final, they went neck-and-neck before Advani romped to his 11th billiards world title, defeating arch-rival Gilchrist 6-3.

The two experienced players however committed far too many errors at the table, especially at the baulk-line to stretch the contest to five hours.

Advani carried on his momentum from the semis as he won the first two frames to take the upper-hand in the contest.

Opening with break of 98, the home lad took the first frame 151-33 before scripting another solid break off 97 to take the second for a 2-0 lead.

Gilchrist, eyeing a double title having already won the Long-up format, fought back with a century break off 112 to win the frame 151-124 before winning the fourth to level 2-2.

Unlike the semi-finals the century breaks did not flow easily. With the scores level Advani bounced back to take the lead winning the next with breaks of 87 and 61.

The 31-year-old went on to take the next as well to lead 4-3 before the Singaporean fought back crafting breaks of 86 and 53.

Going into the eighth frame Gilchrist led with a break of 79. The Singaporean put up a score of 104, before Advani showed his class to come back from behind to win the frame with an unfinished break of 110.

With the scoreline at 5-3 and needing just one frame to lay his hands on another trophy, the Bengaluru lad wrapped it up in the following frame.

Starting off with 62, the city’s Golden Boy pulled off an unfinished break off 88 to claim the crown. As the crowd broke into a big applause, the champion celebrated by thumping his his fist into the air.

Having made a return to billiards after almost an eight-month break, the decorated cueist was relieved to lay his hands on the trophy. “I think I needed this title, and it was special to win it at home. I think I did well to win it and am extremely relieved and this was also the last world championship of the year, so it feels good to end with a win.

“Moreover, given the fact that I haven’t played much billiards this year, this win is more special.”

“It was a very tricky game. We both found it difficult to get going. But I think I did well to come up with the 90’s, 80’s and 70’s break. Going into the eighth frame I gave it all I had, because I knew once I made it 5-3 it

would be difficult for any opponent to come back. From there on wrapping up the game was easy,” said a relieved World Champion.