Challenging week for U Mumba

After two consecutive defeats, Zone A table toppers will look to get back to winning ways in inter zone matches at home. 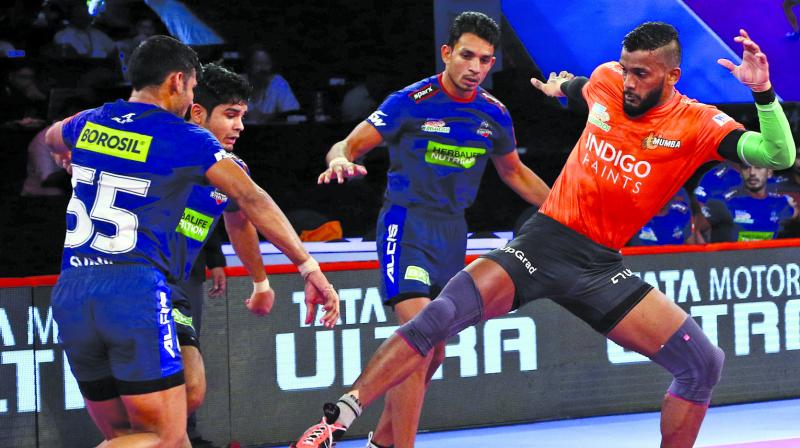 U Mumba raider Siddharth Desai during the match against Haryana Steelers.

After a bright start to their home leg, U Mumba suffered two close losses in the Zone A matches of Pro Kabaddi League at Dome in National Sports Council of India, Worli. Fazel Atrachali’s side is still at the top in Zone A standings and now they will be looking to get back to winning ways in Inter Zone Challenge Week that starts on Tuesday.

Puneri Paltan will take on Telugu Titans in opening clash on Tuesday followed by U Mumba’s game against UP Yoddha’s. The latter team is led by Maharashtra skipper Rishank Divadiga. U Mumba also meet Bengaluru Bulls and Tamil Thalaivas before the end of home leg.

U Mumba had demolished Jaipur Pink Panthers in their opening home leg clash by 48-24 but were edged out by Gujarat Fortune Giants (38-36) and Haryana Steelers (35-31) in close affairs.

A couple of mistakes have cost the hosts two games and Iranian coach Gholamreza Mahmoud Mazandarani will be keen to rectify flaws and devise means to counter over reliance on star raider Siddharth Desai and defender Fazel in key matches.

U Mumba fought hard but fell short by two points against the Gujarat Fortune Giants.

Gujarat started the game strong by picking up crucial points, but a hasty decision by Fazel to take a review proved unsuccessful and U Mumba lost their only review within the first 10 minutes. U-Mumba was trailing 18-14 in the first half.

But they caught up quickly in the second half with Siddharth and Rohit Baliyan clinching crucial raid points and inflicting an all-out which helped U-Mumba take a lead for the first time in the match leading the game by 25-21 with 11 minutes to go. Soon after a disastrous tackle saw all five U-Mumba players out of the game leading to an all-out giving a four point lead at 34-30 to Gujarat with less than three minutes to go.

“We have a fantastic core of raiders. Even when I’m not on the mat, my fellow raiders ensure that we keep the scoreboard ticking. I do shoulder a bulk of the responsibility but by no means am I the only one contributing,” Desai told reporters after loss against Fortune Giants. He had been rested in the first game here and Abhishek Singh and Co responded well in his absence. But benching Abhishek against Haryana Steelers on Sunday didn’t work for the hosts.

U Mumba had an obvious advantage against Haryana team given their two earlier wins were by a margin of 27 points and 10 points respectively, but they repeated same mistakes. U Mumba started strong and maintained it to get one-point lead at 17-16 going into the second half.

The team stepped up to maintain their lead at 28-25 with five minutes on the clock.

Siddharth made an error giving a non-raid technical point, followed by an unsuccessful raid to reduce the margin to a point lead. It was a close encounter with Haryana taking a one point lead at 29-30 with less than a minute to go.

Fazel who rarely missed anything in the first game has had quiet in two games and he will like to respond quickly with brave tackles.

“It’s just fatigue. A day’s rest and he’ll be back to his very best. We’ll rotate the rest of the team as well,” U Mumba coach added.