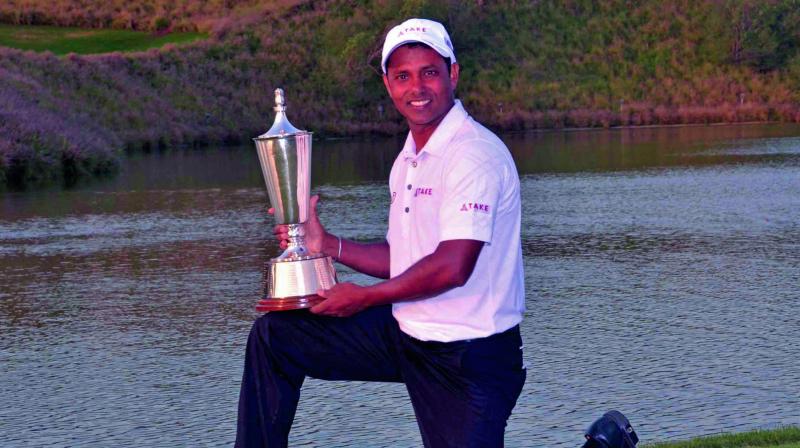 On Sunday at the DLF G&CC, there was remarkably little drama as the last few groups turned for home. Chawrasia had already taken a comfortable cushion into the final day when he came back in the morning to rack up a four-under 68 in the incomplete third round.

And as the holes ticked away, his grip on the silver trophy grew stronger and stronger riding on magnificently nerveless, pinpoint golf. He would finish on a one-under 71 for the day and 278 total, 10 under par for the tournament.

Challenges popped up, and faded away. Malaysian rookie Gavin Green had fired a seven-under 65 in the third round to close in. Spain’s Carlos Pigem was within striking distance for a while, as was Irishman Michael Hoey. Not one of them could sustain the push towards the leader.

There was one moment where it could have gone wrong. The notorious uphill, dogleg right 17th had not seriously tested Chawrsaia over the first three rounds, but he did get a fright in the fourth. His approach shot with an eight iron bounced off the stone wall backing the green, but bounced back into play. Green’s approach shot from a similar position found the water off the bunker wall.

It told the story of Charwasia’s 72 holes at this venue where just seven players would finish under par. The first day saw him gauge the course, after which he never went off the pace.

And as the final group teed off on the 18th hole, the defending champion as good knew the title would be his for a second year running, only the third such instance in the tournament’s 53-year history. Pigem hammered his drive into the bushes on the right, and two subsequent provisional shots went into the thick grass on the opposite side of the fairway. Chawrasia’s drive nailed down the centre of the fairway.

“After the tee shot on 18, I felt I’d won the tournament,” he said coming off the course doused with cold water by his mates and well-wishers. “I feel great as it’s one of the toughest courses. This is probably the best win of my career as it was a really tough course.”

Thereafter it was chip-chip golf. An eight shot lead is as good as it gets and as Pigem hacked his way to a double bogey and Green finished with a par, Chawrasia bogeyed, his third dropped shot of the day, but it no longer mattered. He was champion, again, just like Jyoti Randhawa back in 2006 and 2007.

Anirban Lahiri finally came to terms with the course, finishing with a birdied 18th that gave him a share of fifth place and 59,249 euro paycheque alongside world no. 26 Rafa Cabrero Bello and the unfortunate Pigem, while Chawrasia walked away richer by 275,827 euro. More importantly, it pushed him up to second on the Asian Tour order of merit and guaranteed a two-year exemption on the European Tour, his next target. It was the 38-year-old Kolkatan’s fourth European title, all of which have come at home.

Green finished an impressive second after signing off with a 75, his effort sealing his full playing rights for next season after picking a runner-up cheque worth 183,885 euro.