Earlier, another local hero B. Sai Praneeth set up the victory by beating the Dashers’ Trump player Tian Houwei. 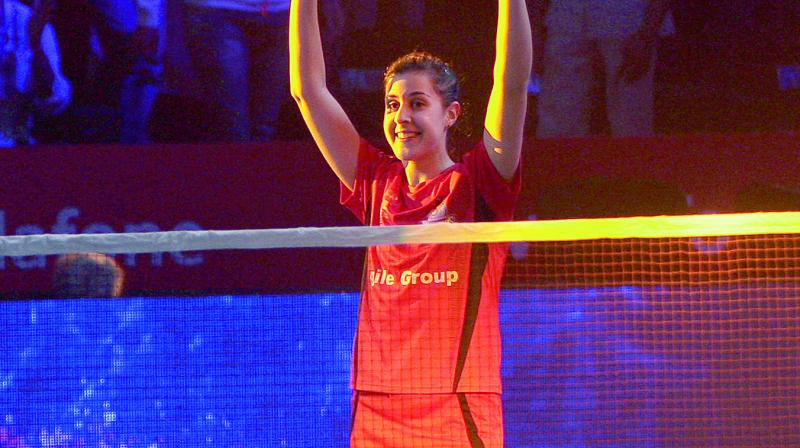 Carolina Marin celebrates after guiding Hyderabad Hunters to victory over Delhi Dashers in their Premier Badminton League semi-final at the GMC Balayogi Stadium in Hyderabad on Friday night.

Hyderabad: Former world champion Carolina Marin came back from a game down to steer Hyderabad Hunters into the final of the third Vodafone Premier Badminton League at the Gachibowli Indoor Stadium here on Friday.

Marin, cheered on by a vociferous home crowd, overcame a fighting Sun Ji Hun 13-15, 15-10, 15-9 to dash the hopes of Delhi Dashers in a gripping semifinal. She picked up two points for her win as her team’s Trump player.

Earlier, another local hero B. Sai Praneeth set up the victory by beating the Dashers’ Trump player Tian Houwei. The Hyderabadi was on song, rattling the Chinese World No. 22 with a flurry of down the line smashes. He raced away to a 15-9, 15-8 victory to get the crowd on their feet.

The Hunters shot into a 1-0 lead on points, as the Dashers lost the point that they had won while also yielding a point.

The Hunters began on the wrong foot, with the Hyderabad duo of Pia Zebadiah Bernadet and Satwiksairaj Rankireddy capitulating in the opening clash. They lost to Ashwini Ponappa and Vladimir Ivanov 15-13, 10-15, 10-15 to silence the crowds.

Ashwini and the tall Russian lost the first game but came back strongly in the next two. India’s doubles specialist Ashwini was in her elements as she ensured Delhi’s comeback with her decisive returns. They took charge soon to wrap up the next two games 15-10, 15-10.

The Marin-Sun Ji clash was a thriller, with both players showcasing a range of shots while also defending well. Marin suffered a setback in the opening game as Sun Ji toyed around with her, mixing her drop shots with perfection. It was a close match still, with Marin losing 13-15.

The second game was tighter and gave the fans a lot to cheer as Marin lifted her game. She rolling hard and retrieved virtually every shot to frustrate the Korean.

Midway through the game, she took charge with a series of points to deflate Sun Ji 15-10. Thereafter, it was Marin all the way. She didn’t give the visibly tiring Sun Ji any opportunity and forced her into errors to capture the third game as well as the match.

World No. 1s in action in second semi

PBL debutants Ahmedabad will be keen to extend their superb run when they take on Bengaluru Blasters in the second semifinal on Saturday.

Women’s World No.1 Tai Tzu-ying and World No.10 H. S. Prannoy are the top guns in Ahmedabad’s arsenal but Bengaluru are no pushovers as they have the Men’s World No.1 Viktor Axlesen in their ranks.