His father Daniel Rudisha took the silver medal at the 1968 Olympics as part of the Kenyan 4×400 m relay team. 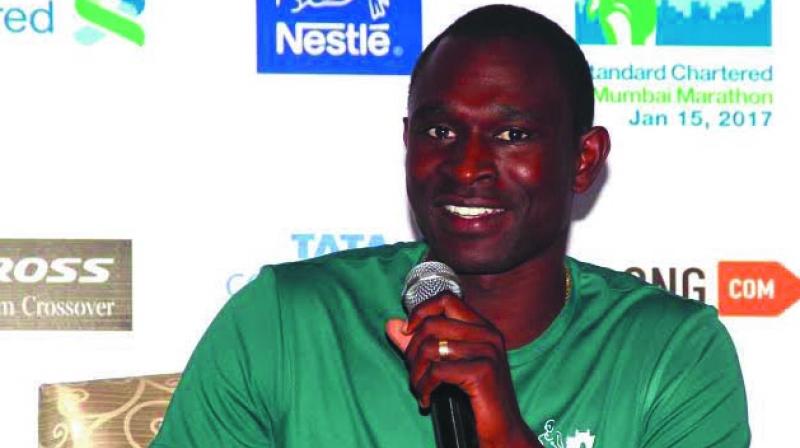 Mumbai: After two straight Olympic gold medals in the 800m, Kenya’s David Rudisha is targeting an Olympic treble at the 2020 Tokyo Olympics.

“Right now my target is Tokyo 2020. It’s good to be able to work towards a goal. I will be around 31 then in Tokyo. It is a good bracket to contest. I still feel a lot of energy. I just want to stay strong, stay fit and to be able to win the title again,” said Rudisha who is here as the international event ambassador of the 14th edition of Standard Chartered Mumbai Marathon.

The 28-year-old star suffered a knee injury after the London Games and could not compete at the 2013 World Championships but made a remarkable comeback by winning his second 800m title at the 2015 Worlds in Beijing and defended his Olympic title at Rio.

“When I was down, I watched the London videos several times for motivation. My family, friends, coach and fans helped me fight injury. I did well in China in 2015 and 2016 was a big year in my career,” he pointed out.

Reflecting on his Olympic journey, Rudisha admitted pressure was huge at his first Olympics in London and at Rio, it was an altogether different feeling.

“The London Olympics was a special race for me. It was my first Olympics. My father was an Olympian; coming from a family of Olympians there was added pressure to deal with too. I just went out there and ran courageously. I was happy to win and to make a new world record in 2012.

“But to be able to defend my title in Rio was more special to me than winning,” he said.

His father Daniel Rudisha took the silver medal at the 1968 Olympics as part of the Kenyan 4×400 m relay team.

Rudisha said he looks up to former athletes and uses technology to improve.

“I learnt a lot from them, watched their videos. I  learnt to run fast and you can’t stay with the pack. Run courageously, make pace and only then you can achieve. The 800m is short race, you have to go all out and made things happen. You set the bar, high youngsters take it up from there,” he said.

Asked whether he would run the marathon at a later stage of his career, he said, “I am more of a sprinter than a long-distance runner. I love to run 400m and 800m races. My manager pushes me to do 1500m, I can’t see myself doing that now but in future may be,” he said.

Top challengers in the men’s full marathon Levy Matebo of Kenya and Ethiopian Seboka Dibaba are hoping to break the course record keeping in mind the low temperatures here.