Tamil Thalaivas now have 40 points from 20 matches and are fifth in the Zone B table. 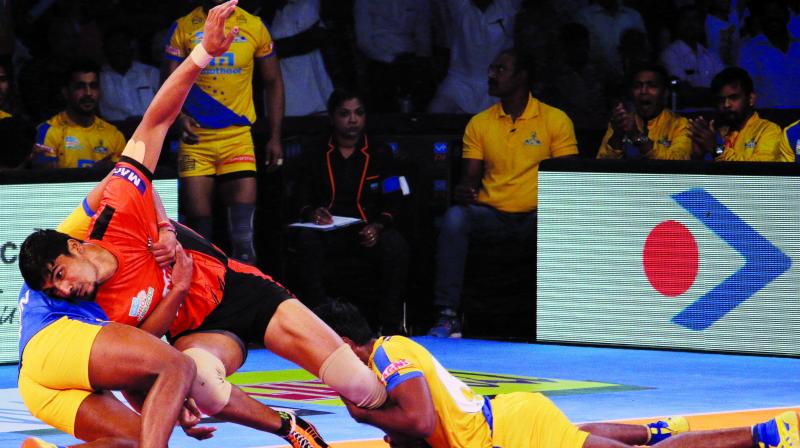 Thakur scored 15 raid points and delivered every time his team were looking down and out.

Ajay Thakur produced a terrific raiding performance to inspire Tamil Thalaivas to a 38-35 win over U Mumba. Thakur also reached reached the 500 raid point milestone in the history of Pro Kabaddi League. Thakur scored 15 raid points and delivered every time his team were looking down and out.

U Mumba missed the experience of Anup Kumar and faltered under pressure. Darshan Kadian and Shrikanth combined to score 15 points for U Mumba but just fell short. Tamil Thalaivas now have 40 points from 20 matches and are fifth in the Zone B table. U Mumba are fourth in Zone A with 56 points from 21 matches.

Thakur scored three raid points in three minutes as Tamil Thalaivas took a 5-1 lead after four minutes. Darshan Kadian made a super raid in the sixth minute as U Mumba trailed 6-7. U Mumba then scored five straight points to lead 10-7 in the 10th minute. Tamil Thalaivas’ misery was compounded further as they suffered an all out to trail 8-14 after 12 minutes.

Thalaivas did come back in the last five minutes of the first half to reduce the lead to just three points. U Mumba went into the half time break leading 18-15. The second half saw U Mumba in control of the proceedings leading 25-19 after 27 minutes. Thalaivas inflicted an all out in the 34th minute to trail 29-30. Thakur later scored with another raid as Thalaivas trailed 32-33.