The next big thing

The Velveteen Dream, Undisputed Era and Adam Cole emerged victorious after much drama. 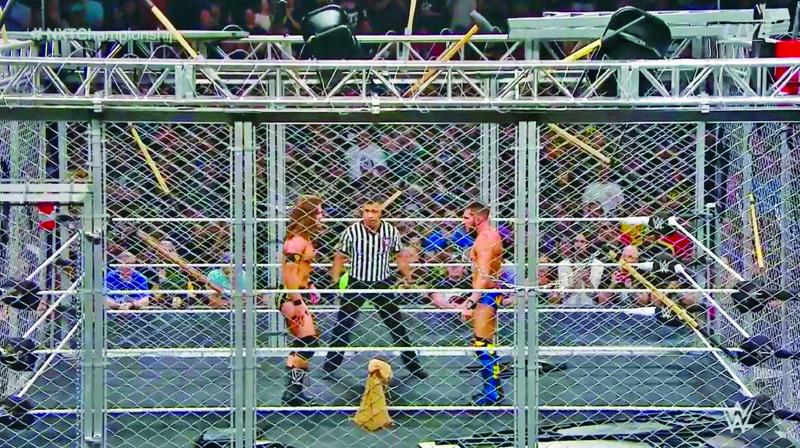 Adam Cole and Johnny Gargano face off during their challenging cage round at the WWE's NXT Championship match at the Scotiabank Arena in Toronto on Saturday.

Toronto: Lights, camera, action and reaction. That was what the WWE’s NXT TakeoverToronto show was all about on a sizzling Saturday night here. With summer on in the country and Summer Slam (the annual showcase event) coming up the next day, the feeder group for future big ticket events turned up heat at the Scotiabank Arena ring by several degrees.

The evening featured a variety of matches - a three-way tussle between The Velveteen Dream, Pete Dunne and Roderick Strong; a doubles match (called the Tag Team Championship) that pitted The Street Profits, comprising Angelo Dawkins and Montez Ford, against Undisputed Era, represented by Kyle O’Reilly and Bobby Fish; and a best-of-three rounds bout between Adam Cole and Johnny Gargano being the highlights of the evening.

The Velveteen Dream, Undisputed Era and Adam Cole emerged victorious after much drama.

Stunning throwdowns, somersaults, locks aimed at choking opponents, jumping on rivals from the top of the ring after spectacularly flying off the ropes, kicks, counter punches and a series of elbow strikes were common acts of aggression at the charged up full house.

The crowd reaction is equally violent. “Step on her face,” “break his fingers” and “drop him on the table” are some of the full-throated cries of the fans, who get their kicks literally out of kicks. It’s the spectacular stuns that they pay to watch and vociferously back their favourites.

However, the match between Cole and Gargano hogged the spotlight. First round to crowd pet Cole after the latter committed too many fouls. The second was a free for all street fight in which both wrestlers literally threw everything - mostly tables and chairs -- at each other after going right into the stands punching and kicking each other, much to the delight of a roaring crowd on their feet. Gargano took the second, forcing the decisive Cage round where neither had the chance to get off the ring with a cage adorned with hammers, sticks and chairs descending on it. The gruelling round concluded when the near-exhausted wrestlers climbed to the top of the cage and fell to the floor, Cole ending on top, even as they crashed through a table during their plunge. Gargano too got a standing ovation as he walked off the ring.

The Triple Threat match too triggered loud cheers with all three wrestlers coming up with power-packed performances.

On the women’s side, Shayna Baszler got the better of Mia Yim after they went neck-and-neck for most part of the match before the former’s tight lock forced Mia into submission.