Having plotted opponent’s downfall inside the field during six seasons of PKL, new Puneri Paltan coach Anup Kumar is now working behind the scenes. 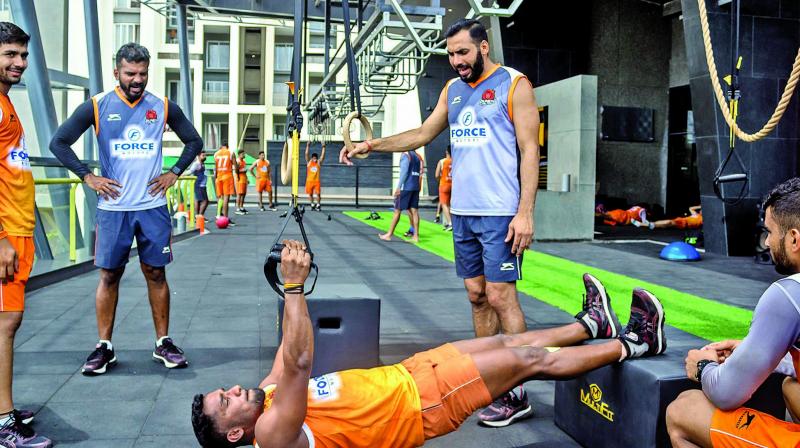 Former India skipper Anup Kumar is enjoying the new role as Pro Kabaddi League franchise Puneri Paltan coach. He spent five years with U Mumba franchise during which they reached final thrice and won the title once. Last season he had moved to Jaipur Pink Panthers and later announced retirement towards the end of PKL-6. He took up the coaching role immediately and is now working behind the scenes to help Puneri Paltan aim for their maiden title.

“Kabaddi is an inseparable part of my life, I live and breathe Kabaddi. After retirement last year, coaching was something that definitely crossed my mind. When Puneri Paltan’s management approached me, I saw an opportunity and grabbed it immediately. Being back in action and returning to the Vivo PKL in a new role is very exciting for me,” he said

Announcing his retirement was a “difficult” decision for him but it didn’t took much time for the champion player to settle into a coaching role. “I took up coaching with the thought that it will keep me closer to the game and I will be able to hone the talent of the young ones and provide them with the correct platform. Being back to the game feels wonderful, but this time I’ll be working behind the scenes. I would not say it is difficult, coaching is a new challenge that I have taken up,” he added.

Known as Captain Cool in the Indian team with which he won World Cup and Asian Games gold medals, Anup feels his experience as a top class player will help but pressure will be higher as a coach. “Having led the Indian team before, I understand the specifics that go into devising strategies for my team. I’ve had a comprehensive experience of the League-format as well, which does make it quite easier for me. However, the pressure is still the same, in fact the stakes are much higher as a coach. As a player, it was just about my performance, but now, it is all about my team and the way I guide them,” he said.

Also known as Bonus ka Badshah due to his intelligent and effective raids, he is more than satisfied with his playing career. “When I sit and look back, I feel extremely grateful to have received the opportunities that I have in the past which have helped me establish a thriving career. Today, people know me as Captain Cool and Bonus Ka Badshah and it is all because of Kabaddi. It has given me a lot in terms of success, love and admiration that I have received from the people. Satisfied would not be the correct way to put it as Kabaddi has given me much more than I asked for,” he felt.

With the new league starting on July 20, Paltan’s preparations for the league under Anup Kumar have gained momentum. “As a squad, I think we have a brilliant bunch this season and the players are dedicated and focussed towards achieving their goal. I am focussing not only on their physical fitness but also on mental strength of my team to ensure holistic development,” he said.

Kumar is optimistic with Puneri Paltan’s chances in the upcoming League and sees a lot of potential in his squad. The Pune based franchise are yet to win a PKL title.

“We have a very balanced side this season which would shape up well for Puneri Paltan. Not only strengthening our raiding department but also concentrating on our defence unit is equally a priority for us. Our raiding is led by strong players like Nitin and Manjeet and our defence by experienced players like Surjeet and Girish.

As a coach, my focus would be to improve our team’s skills, fitness and presence of mind on the mat. I will try my best to make sure we clinch the title this season,” the legend from Haryana, said.