Officials said the league expects the shutdown to last a minimum of two weeks, but cautioned that time-frame is very fluid 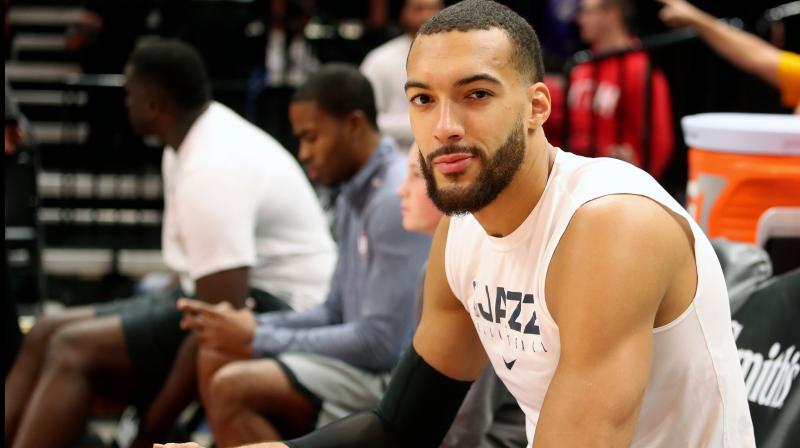 Utah Jazz center Rudy Gobert who, according to inside sources, tested positive for coronavirus, the results of which were declared shortly Utah's game against the Thunder in Oklahoma City was to begin on Wednesday. AFP Photo

Miami: The NBA has suspended its season "until further notice" after a Utah Jazz player tested positive Wednesday for the coronavirus, a move that came only hours after the majority of the league's owners were leaning toward playing games without fans in arenas.

Now there will be no games at all, at least for the time being. A person with knowledge of the situation said the Jazz player who tested positive was center Rudy Gobert. The person spoke to The Associated Press on condition of anonymity because neither the league nor the team confirmed the test.

"The NBA is suspending game play following the conclusion of tonight's schedule of games until further notice,'' the league said in a statement sent shortly after 9:30 p.m. EDT. "The NBA will use this hiatus to determine next steps for moving forward in regard to the coronavirus pandemic.''

The test result, the NBA said, was reported shortly before the scheduled tip-off time for the Utah at Oklahoma City game on Wednesday night was called off. Players were on the floor for warmups and tip-off was moments away when they were told to return to their locker rooms. About 30 minutes later, fans were told the game was postponed ``due to unforeseen circumstances."

Those circumstances were the league's worst-case scenario for now -- a player testing positive. A second person who spoke to AP on condition of anonymity said the league expects the shutdown to last a minimum of two weeks, but cautioned that time-frame is very fluid.

"It's a very serious time right now," Miami Heat coach Erik Spoelstra said. "I think the league moved appropriately and prudently and we'll all just have to monitor the situation and see where it goes from here."

The Jazz released a statement saying a player -- they did not identify Gobert -- tested negative earlier Wednesday for flu, strep throat and an upper respiratory infection. That player's symptoms diminished as the day went along, but the decision was made to test for COVID-19 anyway. That test came back with a preliminary positive result.

"The individual is currently in the care of health officials in Oklahoma City," the Jazz said, adding that updates would come as appropriate.