The two-time Olympian announced the launch of Jwala Gutta Academy Of Excellence in outskirts of Hyderabad on Tuesday. 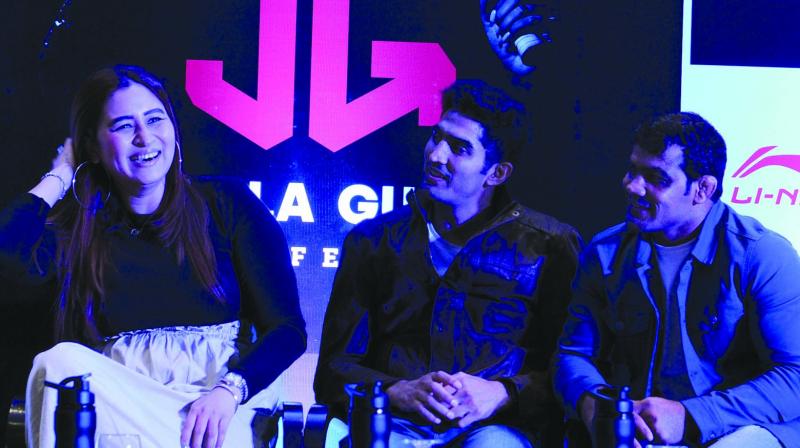 Jwala Gutta shares a light moment with boxer Vijender Singh and wrestler Sushil Kumar at the launch of the Jwala Gutta Academy Of Excellence in New Delhi on Tuesday. (Photo: BIPLAB BANERJEE)

New Delhi: Doubles specialist Jwala Gutta, who has been always vocal about the doubles category getting step-motherly treatment from the badminton fraternity in India, has come up with a new solution to the problem. The former India star has started her own school to groom doubles players. The two-time Olympian announced the launch of Jwala Gutta Academy Of Excellence in outskirts of Hyderabad on Tuesday.

“It’s a dream for me. My father has put in a lot of effort. We are still half way through. If I manage to groom medals winners at my academy, then I can say my dream is truly fulfilled. This is just the start,” Jwala said in a press conference in New Delhi.

“I will give priority to both singles and doubles. In fact, doubles needs more attention as there are not much results coming in... it’s high time. Being a doubles player I would love it if our country gets more results in doubles,” Jwala told this newspaper.

“My role is to be the mentor, to coaches, players and parents. It is a 55-acre property sans any pollution. There will be no constructions allowed around that place. It’s a beautiful place with beautiful atmosphere. There’s education as well. You can train and take education under one roof,” the 36-year-old said.

Comprising 14 courts in total and with a seating capacity of over 600 people, the academy is located in Sujatha High School, Gachibowli. Not just badminton, the complex also has training facilities for a plethora of sports, including cricket and swimming.

Funding was a major issue for Jwala in her quest to start the academy. After she was denied any help from the government, Jwala’s father Kranti sold his house and put in his lifetime savings on the line to fulfil his daughter’s dream.

Asked about the academy being compared to the Pullela Gopichand Academy based in the same city, Jwala said competition is always good and will bring out better results. “One academy competing with another is good as long it is healthy. We can upgrade and improve and that should be the mindset when it comes to sport. I think we need more academies given the demand in Hyderabad, which is my hometown,” she said.

“There is dearth of academies in our country to groom new players. More academies mean, more players and more medals,” the 2010 Commonwealth Games gold medallist said.