The former UMumba skipper fails to impress at his one time den, as hosts outplay Jaipur Pink Panthers. 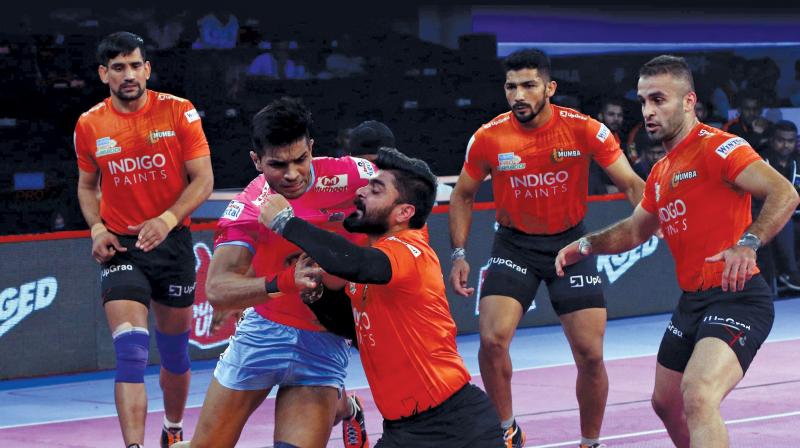 Former UMumba skipper Anup Kumar is a well-known name at Dome in National Sports Club of India, Worli. During the previous five seasons, he led UMumba to many triumphs here in the Pro Kabaddi League with smart raids and match awareness. The captain cool's name reverberated through out the Stadium.

But on Friday night he returned to the Dome for the first time this season with visiting team Jaipur Pink Panthers but couldn't replicate same magic. He failed to score points on his raids in first half and his team looked woefully out of form to rarely put up some fight. UMumba started their home leg with authoritative 48-24 win.

“A match is a match be it with any team. I played with UMumba for five years but now I am playing with Jaipur Pink Panthers. We enjoyed considerable amount of support here,” said Anup whose franchise is owned by Bollywood actor Abhishek Bachachan.

Jaipur Pink Panthers are languishing at the bottom of the Zone A standings with UMumba on the top. Anup Kumar’s side had come here after a win and had hoped to build some momentum which didn’t happen due to their dismal show. Jaipur never recovered from an injury to Nitin Rawal.

“No player could click for us today. If we continue to play like this then we can’t reach far. We will meet and talk about it and try to do well in future matches,” added Kumar.

The hosts led by Fazel Atrachali inflicted two all outs in the first half and two more after the break as Jaipur team had no answers.  Fazel was flawless in tackles while Abhishek Singh and Darshan Kadian came back rarely without a point in their raids. This was even after inform Siddharth Desai and Rohit Baliyan was given much needed rest by Iranian coach Gholamreza Mazandarani before fielding Desai in the last few minutes.

Besides Anup, UMumba kept another star raider Mohit Chillar in check. They led 37-12 with 12 minutes to go. However, a late fight back from Jaipur reduced the deficit a bit.

The home team got early momentum with Darshan taking on dangerous defender Chillar, with two consecutive raids and Anup Kumar falling prey to Fazel, the contest soon turned into a one-sided affair. Abhishek also got involved in tackles and allrounder Vinod Kumar made tough for visitors to come back.

“We could have got early points to build momentum but it couldn’t happen. Fielding different raiders clicked for them, also the tackles were made by different defenders which unsettled us a bit,” admitted Panthers coach Srinivas Reddy.

Abhishek finished with 10 points from 17 raids and added two from tackles, to finish with 12 points, while Darshan finished with 10 from 17. Vinod’s all-round show saw him score four raid points and bag three tackle points. In the defence it was captain Fazel who stole the honours with five points from six tackles, while Rohit Rana scored three from six.

“I always try to stay calm. Our coach said play according to the situation and don’t think too much,” Abhishek said.

Fazel said they are happy to come home after brilliant show in the League so far and will love to win as many games they can. “It is our home and we aren’t under much pressure as we enjoy the support here. This is going to be an interesting leg for the team and we are well prepared. We will have different strategies for different teams,” Fazel said.