The Arjuna-awardee paddler was also optimistic about the team's chances in the Games. 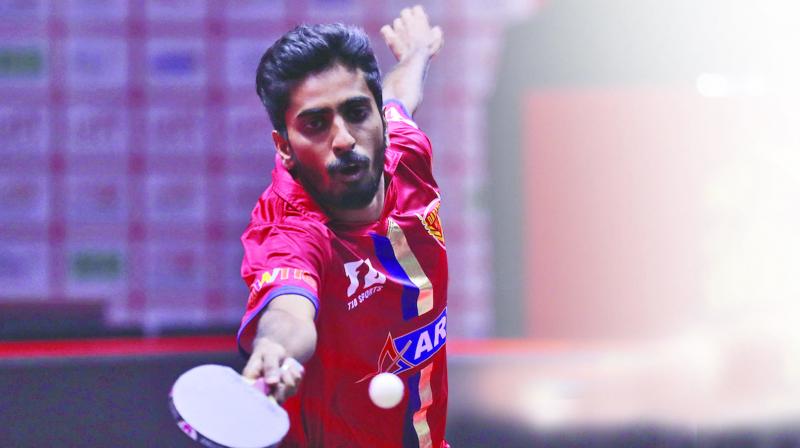 Country’s upcoming talented paddler Sathiyan Gnanasekaran was confident of fetching a medal at the 2020 Tokyo Olympic next year. With the Olympics qualifiers set to take place in January next year, Sathiyan was keen to utilise the time with utmost sincerity.

“According to me, qualifying for the Olympics is something that should happen automatically. I’m not even thinking about it much, instead, I’m thinking of going out there and winning a medal. Winning the Asian Games medal has been a great boost for the entire table tennis team and I will be extremely happy to qualify as a team and get an Olympic medal,” Sathiyan said, on the sidelines of the Ultimate Table Tennis League at the Thyagaraj Stadium in the capital on Saturday.

The Arjuna-awardee paddler was also optimistic about the team’s chances in the Games, saying that the team is on an altogether different level right now.

“We are in great shape and I am really happy with the way the team has been performing. Seeing the current performance of the team, I feel it is a great sign for us to show the world that the Indian table tennis is rapidly reaching new heights,” said Sathiyan.

Working without a national coach for almost a year did not bother Sathiyan much as he seemed quite happy with his performance in the year gone. He is currently working with his personal coach in Chennai.

“I’m not putting that much energy into this coach thing. I’m working with my personal coach Subramaniam Raman sir in Chennai. Coach has not been there for more than a year now and my performance and ranking is improving constantly. We are planning my road map on our own and deciding where to go, which tournaments to play, where to train and the results have been amazing. I will surely be continuing with my road map with Raman sir. With the new coach coming soon, it is definite to help us even better”, said the 21-year-old.

Currently ranked 30 in the world rankings, Sathiyan seemed confident about improving his ranking to a much better number this year by having a highly planned schedule and playing number of major Pro Tour events, specially the World Cup, scheduled to take place in end of November.

“I’m definitely targeting to break into the top 15 this year. With the world cup coming up in November, I think that’s a great tournament and I have a good chance there. We just need to keep pushing further from here as every match is going to be tough now. I don’t see the numbers much, right now I’m just focusing on improving different aspects of my game and I’m really working hard for it.”