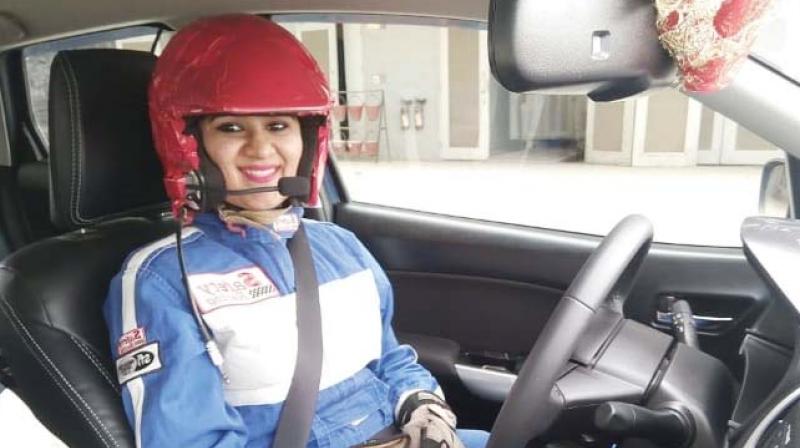 Mumbai car racer Sneha Sharma has competed with men in car racing and played an Important role in inspiring women to Race. After fighting her way back from dreaded knee injury, and despite her flying career touching heights,she aims at a stronger track comeback.

Mumbai racer Sneha Sharma was elated after all-women’s team participated in the opening round of the JK Tyre-FMSCI National Racing Championship in Coimbatore, last weekend. In its 21st season, six ladies representing Ahura Racing were selected after a nation-wide talent hunt. It included a celebrity driver, Maharashtra actress Manisha Kelkar, leading the charge against the big boys of racing.

Sneha, who has been competing with men since more than a decade, had been trying for more women to participate in racing and was happy when it finally happened. “Me along with JKTyre and FMSCI had been trying to bring more women into motorsport. Finally, all women team event happened. I am happy our efforts bore fruit,” said Sneha.

The 27-year-old, who is also a professional pilot with Indigo,  has been regular in the JKTyre National Racing Championship. She sat out of the first round last weekend and may miss the second round scheduled for August 31 to September 2, as well. She has been undergoing six-months training after getting promoted to Captain.

But she is set to light up the track in third round from October 12 to 14. The final round will be held from November 16-18 at the majestic Buddh International Circuit in Greater Noida.

“Ten years back, I put down the helmet and picked up the flying headset to become a pilot. On comeback from Go Karting I graduated to

F4. Became the fastest Indian girl and raced with big brands. Similarly, at present I am undergoing training after getting promoted. The promotion was due from three years but I was delaying it. But now I thought it is the right time. That is why I missed the first round of the JK Tyre Motorsport national racing championship and missed the second round as well. But my love for racing remains strong and I will come back stronger,” she said.

She revealed the promotion will not increase her working hours and she will give racing — her first love — similar time as before. “My flying hours will be the same so nothing much is going to change. My contract with Indigo is such that I get enough time to train and compete in racing. I have that much of leaves. Earlier due to early flights my work outs were suffering but now I have been able to manage it well,” she said.

She had weight issues earlier in her career which she had sorted out by managing time for workouts and maintaining strict diet but late last season she suffered knee injury which was a tough time for her. But she found a way to fight back.

“It was a difficult time for me. Lack of sports physio knowledge in Mumbai made it worse. I changed 13 physios before meeting Dr. Anant Joshi and his team of physios  who trained me. I finally fought my way out with pool therapy and extensive strengthening exercises. It was a real struggle to maintain my weight when I was more or less  on bed rest. But thanks to my deep knowledge on nutrition I actually managed to loose weight.”

“I used this time to learn about every muscle of the body and to train them independently.  It took me six months to recover but I feel stronger than I felt before the incident,” Sneha said. Her ultimate aim is to compete in F3 like Formula BMW Racing. “Earlier I qualified for racings in both women’s and men’s categories but I always chose to compete with men so that I could push myself and be competitive at global level. I had offers to race in Malaysia and Germany but at the moment I put them on hold. My ultimate aim is to race abroad,” she said.

Even though Sneha doesn’t have many races lined up besides JKTyre this season, as she won’t be participating in MRF races, the multitalented girl has a packed season ahead.

“I am doing a lot of off track activities like stunt videos for Renault and Maruti, shooting web series related to driving, driving safety cars, etc.”

The racer also helps Maharahstra Government for road safety camps and is associated with Horn Not OK campaign besides being associated with Radio One and doing motivational talks like Ted Talks.