The summit clash was a closely fought affair, as the younger Freunds outfit did well to match their more senior opponents. 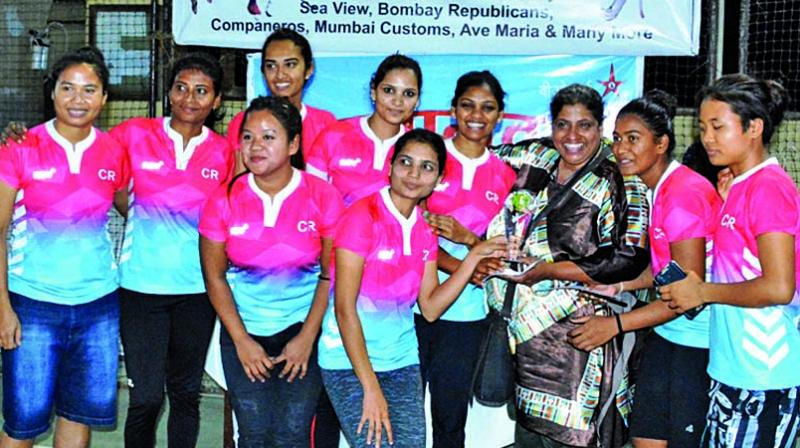 Women’s winner: The victorious Central Railway players are all smiles as they receive the ‘Champions’ trophy and prize-money from Guest of Honour, Lalitha Pinto, a former Western Railway player. Central defeated Freunds SC 6-5 via the sudden death tie-breaker in the final.

Freunds twice took the lead through their opportunistic and prolific scorer Ruqqaiya Shaikh, who was later declared player of the tournament’. But, Central fought back and managed to score twice in the second session through S. Rajneeta to force a 2-2 draw and to take the contest to the penalty strokes tie-breaker.

The summit clash was a closely fought affair, as the younger Freunds outfit did well to match their more senior opponents. Towards the end of the first session, against the run of play  they managed to take the lead through Ruqquaiya, who scored with a snap effort and ensured her team went into the break with a slender 1-0 advantage.

Central made a strong reply, and immediately on resumption, managed to find the equaliser through Ranjeeta. But Freunds quickly regained the lead with Ruqqaiya scoring her and the team’s second goal of the match. With time ticking away, Central managed to get a late equaliser and once again it was Rajneeta who came to their rescue, to take the match to the penalty strokes duel. In the tie-breaker, Central converted through Ranjeeta, Kavita Vidyarthi and Renuka Yadav. Vidyarthi succeeded in scoring again in the crucial sudden death to clinch the win.

Freunds managed to score through Ruqqaiya, Madhavi Patil and Meenakshi in the tie-breaker, while Madhavi missed in the sudden death.