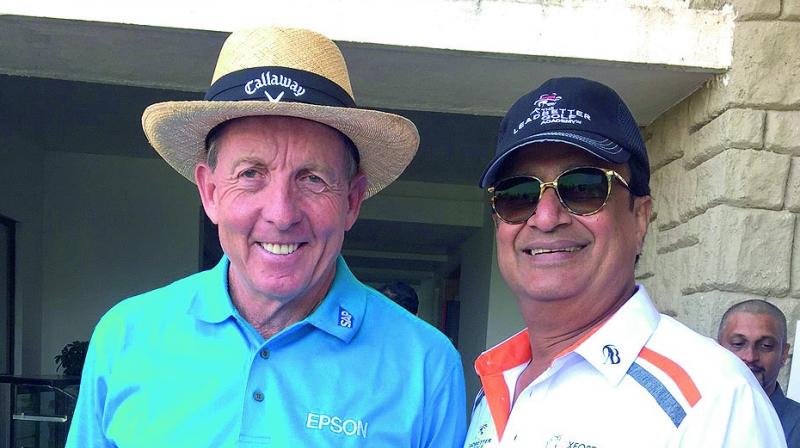 David Leadbetter with Anil Seolekar at the launch of Leadbetter Golf Academy in Pune.

Bengaluru: In a move that could potentially change the golfing landscape in the country, renowned golf instructor David Leadbetter launched his first golf academy in India in Pune at the Oxford Golf Resort last week.

With stars like Anirban Lahiri and Aditi Ashok taking the game to the next level for the country, Leadbetter aims to develop the game at the grass root level to help bring in more kids to take up the sport in the country.

The golf guru who has worked with the likes of Nick Faldo and Lydia Ko, has 29 academies across 14 countries, is widely considered as the “go-to” coach for many top players and his teaching ways have seen many a youngster evolve into a world-class player.

The 64-year-old, who was in the country for the first time, opens up about the aim of the academy and the growing potential of the sport in India amongst other things.

Excerpts:
On the goal of the academy: Our goal is to create champions but we honestly know that there will be very few, a small percentage that will make their mark in the game. The academy is a platform to develop talent. It’s really my passion to help young players reap their potential. We want to help good players become great players.

I have had the good fortune of working with players who have won two majors, men and women. We work with a lot of good players, and it seems to me that there is a tremendous amount of talent in India.

On his methods: I’ve been coaching, teaching this game for many years now and I have several academies around the world. What I want is to promote the game at the youth level because that’s really how you grow the game. What really worries me is that in certain countries golf is diminishing and to keep it popular you have to promote it at the grass root level and develop a passion amongst the kids.

At the academy we have a programme for kids which not only helps develop golfers but also helps develop them as people. The great thing about golf is it develops a certain type of character because to play golf you have to have all the traits to be a good person — tenacity, patience, perseverance, work ethic, honesty, integrity.

On the academy: The work done here is first-class, it is as good as any of my other facilities in the world. What we are trying to do is get people excited about the game. For me the game is not for the elite or the rich, it’s for everyone. It is expensive but it’s is an argument we can defeat.

On coach-player relationship: Coaching is not like marriage. I was with Nick Faldo for 13 years after which we parted ways. Later parted ways with Lydia Ko also because her parents wanted her to win every tournament and that was not possible. Coaches come and go, caddies come and go. It’s human nature to keep improving. The grass is always greener on the other side of the hill.