After the team’s eighth defeat of the season, coach Anup strives to keep players motivated ahead of the home leg. 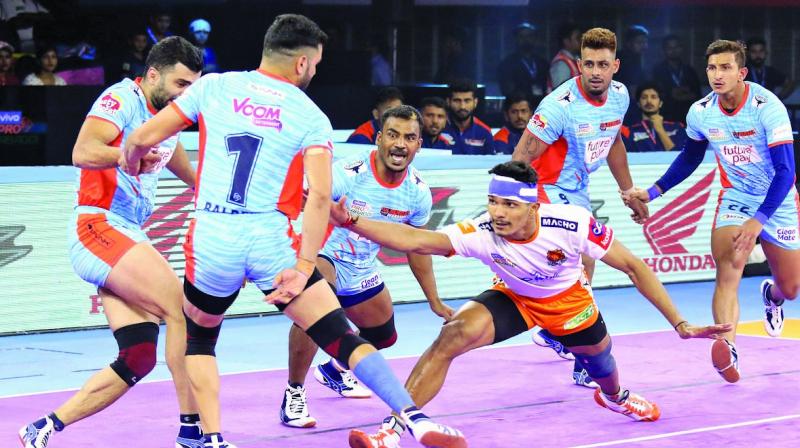 Puneri Paltan played Do-or-Die raids towards the end of the match but they fell short at the end`.

Puneri Paltan suffered its eighth defeat of the season and coach Anup Kumar conceded it will be an uphill task for his team to qualify for play-offs from here. Paltan put in an impressive performance but lost to Bengal Warriors 39-42 in the final minutes of the match in Kolkata on Sunday night. They have now 29 points after 14 matches and are lying at the tenth position in the table.

“I think we were winning the game but gave it away,” Anup Kumar said in the post match press conference.

“It will be an uphill task but that is my job. I have to motivate the team because they played very well against a good team in Bengal Warriors. And if we play intelligently, unlike what we did towards the end of tonight’s game, I think we can still make the Playoffs,” he added.

Anup Kumar will be hoping for a turnaround at home. Puneri Paltan will start its home leg campaign on Saturday, when they will be playing against Gujarat Fortune Giants.

Young Pankaj Mohite and all-rounder Manjeet both impressed for the Pune side as they stifled the Bengal raiders with their electrifying performances.

A closely contested first half saw both teams match each other in all departments. Mohite was handed a rare spot in the starting seven for Pune as coach Anup Kumar benched the experienced Nitin Tomar for the young raider.

The raider made an instant impact as Paltan raced to a four-point lead. But Bengal Warriors raiding trio Maninder Singh, K Prapanjan and Mohammad Nabibakhsh, and the raiders ensured the home side clawed their way back into the game.

A three-point raid by Maninder in the fourth minute was followed by good teamwork from the Warriors as they inflicted an All-Out on Pune in the tenth minute of the half.

But Pune didn’t let that stop their flow and made a comeback through Pankaj Mohite’s incredible raids. Paltan got clinched their first All-Out of the match in the dying minutes of the second half to go into the break trailing by a single point (20-21).

Bengal and Pune kept matching each other in the early minutes of the second half but mistakes from the Warriors’ raiding unit coupled with Manjeet’s all-round brilliance for Pune saw the Paltan take a slender three-point lead by the tenth minute of the half. Pankaj Mohite picked up his Super 10 as the Pune side inflicted another All-Out on the home side in the 13th minute of the half to move to a nine-point lead.

Platan played Do-or-Die raids towards the end of the match but they felt short in the end. “At that point of time, it was best that we played on the Do-or-Die raid. Pankaj Mohite was raiding well and if he could have gotten us a point and extended our lead from six to seven then it would have been beneficial for us,” Kumar said.