Setting the track on fire

Former Olympic sprinter from Mumbai, Sumariwalla who is now the AFI President reveals how India won rich haul of medals at the Asian Games. 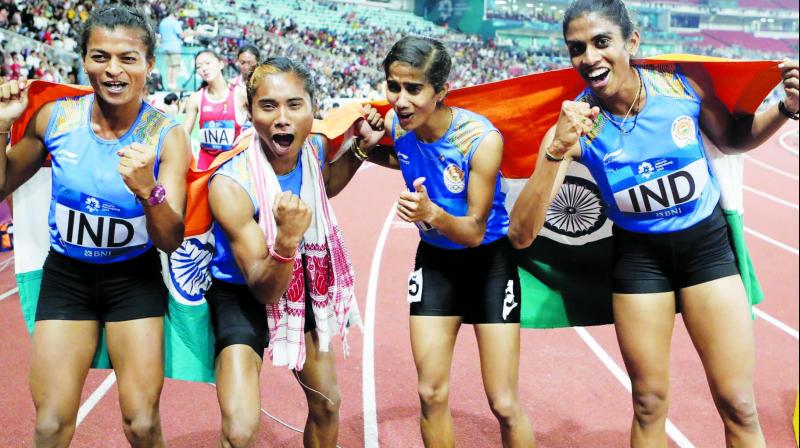 The Indian contigent at the games.

Mumbai may not have any representation at the Track and Field events to show in Asian Games. But the city has produced top class athletes in the past. The stupendous show at the Asian Games involved deep information and strategy from Athletics Federation of India headed by Adille Sumariwalla besides blood and sweat of the athletes.

India won 19 medals in Track and Field events in Jakarta and Palembang which included seven gold, 10 silver and two bronze medals. Biggest positive from the event was well thought performances on the track. Mumbai-based former Moscow Olympian and 11-time national champion in 100 metres, Adille who is also member of International Athletics Federation (IAAF) revealed the hard work his team put in to do well at the Asian Games.

“The strategy team work behind scenes showed in results. It was deep thought after studying heats and performance of athletes from all countries. We go to villages, talk to athletes, and coaches explain to them strategy. It was a great team effort in the end and every body chipped in,” said Adille after the strategists were lauded especially for smartly planning 4x100 metre in women’s relay were Hima Das led Indian team won gold to beat favourites Bahrain.

Athletes from remote areas did India proud, a shift from the past when urban athletes like Adille carried the baton. Adille credited it to the scouting program Athletics Federation of India (AFI) launched six years ago.

“We do all India inter-district athletic championship in which 4000 athletes from 350 districts participate in Under-14 and Under-16 categories. We have all national and even foreign coaches there to see the athletes,” he added.

Adille who became AFI President in 2012 and was re-elected for second term in 2016 until 2020 revealed it was their poor show at Rio Olympics that prompted them to look at the cream.

“At London Olympics we had 12 participants and for Rio Olympics 34 athletes qualified. That was the leap we made from 2012-16. But all athletes qualified from bottom of the rub in Rio and got hammered. Then we had a planning commission meeting last year and Asian Games was our main focus. The government had set sixth place qualifying but we put it three-four place to raise the bar for Asian Games. We didn’t concentrate much on Commonwealth Games as it was in April which is usually off season for our athletes,” he said.

He however said the success at Asian Games wasn’t surprising. “In these games every Indian athlete was finalist and finished in first six that is the sort of bench strength we have been planning. But the success wasn’t surprising, as anybody who has been following athletics from last six years would know the performances Indian athletes have been putting up.” India won 29 medals at 2017 Asian Athletics Championships in Bhubaneswar to top the medal tally.

The 60-year-old city based entrepreneur was hopeful to open the track and field medal account at Olympics in Tokyo.

“It is just the beginning and we have a long road head. We have to continue performing like that or enhance our pace. Olympic standard is different but since I took over in 2012 we have produced two World Junior Champions and Junior world record holders in Neeraj Chopra and Hima Das. We still have challenges ahead but we have to overcome them and move on. I am 100 per cent confident the way we have been planning and athletes have been performing, we will open account in Tokyo,” he said.