Falcons TTC won the inaugural edition of the franchise-based tournament, beating Shaze Challengers 14-9 in the final in Mumbai on July 30. 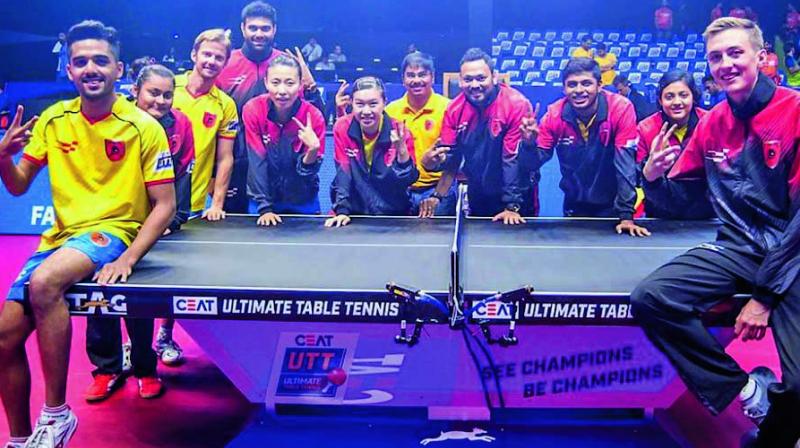 The 63-year-old German was the national coach in 2014 and has shaped the careers of several top players.

Overseas and home-grown coaches have said the recently-held inaugural Ultimate Table Tennis was a positive step towards development of the game in India.

Falcons TTC won the inaugural edition of the franchise-based tournament, beating Shaze Challengers 14-9 in the final in Mumbai on July 30.

“I am really thrilled to see many Indian players progress so well though some of them beat players from my team,” Peter Engel, coach of RP-SG Mavericks team, said on Tuesday.

The 63-year-old German was the national coach in 2014 and has shaped the careers of several top players. Engel said the professional set up of UTT convinced him that the sport’s future in the country was headed in the right direction.

“Professional leagues are a great step forward in terms of bringing the right exposure to your players. While there are many Indians playing regularly in the Europeans leagues, it is important to have a league of this kind in India to create the excitement around the sport and Ultimate Table Tennis has achieved it to a large extent,” he said. “Though just hosting a league alone will not fetch great results internationally, at least, you are preparing your players to face the best in the business and there is so much one can learn during the league of this kind,” he added.

Dutchwoman Elena Timina, who coached the Challengers to the final, said she was impressed with the organisation of the league.

“The organisers have done an exceptional job in terms of carrying out the league which is on par with those in Europe.

“They have also put in a lot of thought behind the kind of player pool, which was critical. Though we did not win the final, I am happy with the performance of our team as well as to see many Indian players hold their nerve against top international stars.

“While I think the Indian men are already on par with international standards, the women can benefit a lot from leagues like these. They have great talent but need to pay more attention to their fitness levels,” the former international said.

Indian coach Arup Basak, who was involved with DHFL Maharastra United, saw the tournament as a platform to learn different techniques from overseas players.

“With best of the Chinese-origin players like Han Ying and Wu Yang taking part, this was the best opportunity for our Indian women to learn as much because rarely do our girls ever get to train against best defensive players. Most of our Indian women are attackers and to learn to play against choppers will help them a great deal in international matches,” he said.