It has been an interesting journey for the young athlete. 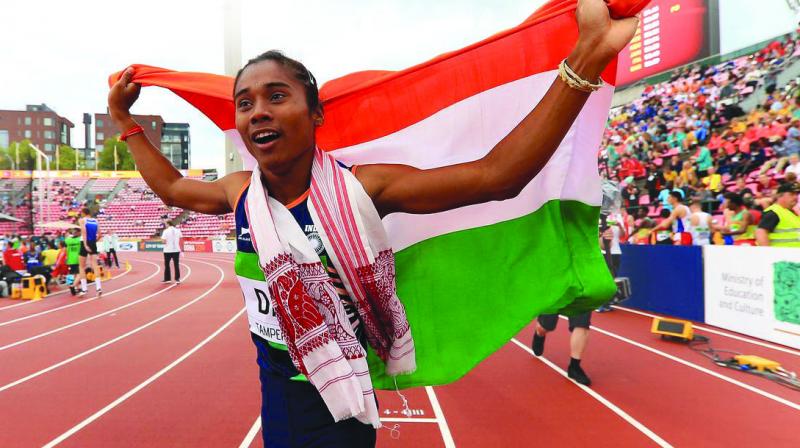 It has been an interesting journey for the young athlete.

When Dhing Express leaves the station in the blink of an eye, everyone is left in awe. What is this train business being spoken about, you ask? Well, Dhing Express is the nickname given to 19-year-old Hima Das, who recently made history by winning the women’s 200m gold at the Kutno Athletics Meet in Poland — within a week of winning her first international gold medal at Poznan Athletics Grand Prix, also in Poland. The athlete had clocked an impressive 23.65 seconds then. She did this despite recurring issues with her back.

It has been an interesting journey for the young athlete. Hima initially wanted to pursue a career in football, a sport she used to play with her friends. She was quite good at it too. However, her school physical education teacher advised her to opt for running instead, after observing her incredible sprinting speed; Hima has never looked back since. The President of India honoured the athlete with an Arjuna Award in 2018. She has also represented UNICEF as the first-ever Youth Ambassador from India.

She’s not even the only young Indian sprinter to have won a gold medal in the latest Poland meet, indicating a trend of emerging athletes from the country who are earning laurels at the international stage. For instance, 24-year-old Muhammed Anas also won gold in the men’s 200m race at the Kutno event. Anas clocked 21.18 seconds to win the race. He earlier broke the national 400m record at the Polish Athletics Championships in June 2016, clocking 45.40 seconds. Another Indian sprinter, 22-year-old V.K. Vismaya, finished third with a personal best time of 23.75 seconds in the race at Poznan. In fact, at the recently-concluded Qasanov Memorial Meet, Indian track and field athletes won a whopping 19 medals, including 12 gold-and this was merely a two-day event.

With 2020 Summer Olympics just around the corner, this comes as good news. Indian sprinters did not bring home any medals during the 2016 Summer Olympics held in Rio de Janeiro, Brazil. This time, the performances leading up to the games seem to be impressive, as the players are all set and preparing hard for the upcoming grand event.

However, Indian athletics still has a long way to go, especially when it comes to the sports infrastructure of the country. Absence of a sports culture, the lack of good qualified coaches or specialists, sports grounds and structures, and inadequate sponsors for training and coaching are considered some of the reasons for India's sub-optimal performance in the past.

Ashok Chaudhary, an athletics coach, commented on this aspect, “I really think every state should have a sports college; the government should work more on the ground level. Every school should appoint at least one coach so that the students get motivated to play something that they are passionate about.” Specifying that Sports Minister Kiren Rijiju is trying hard to bring changes in the sport system by conducting camps all around, Ashok concludes, “There should be more stadiums than hospitals, if people are fit and active in our country, 80 per cent of the health issues will be eliminated. If this happens, Indian sports will improve a lot and we will have a good team in all fields.”