Tanveer thus becomes the third Indian after C.S. Santosh and Aravind to qualify for the Dakar Rally. 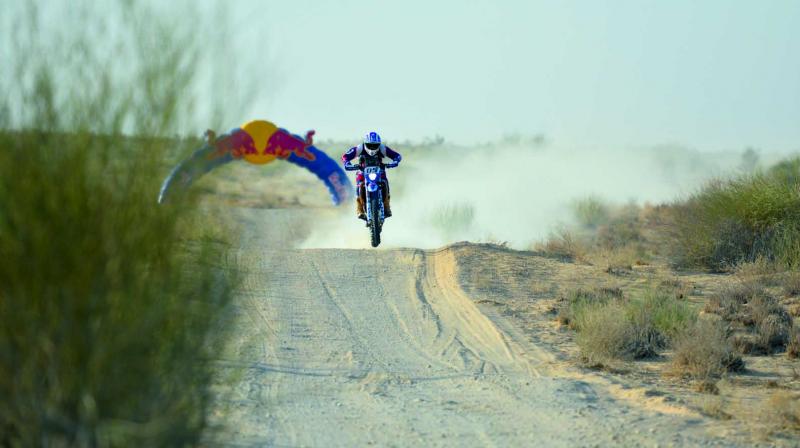 Abdul Waheed Tanveer in action at the India Baja 2017 Dakar Challenge Series in Jaisalmer on Sunday.

Jaisalmer: Experienced rider Joaquim Rodrigues of Hero Motorsports used his skills and expertise to win the India Baja 2017 Dakar Challenge Series, here on Sunday. Maneuvering his way past the sandy terrains of the Thar desert, Rodrigues finished in a cool4:45:22 seconds, pipping the field by a huge margin of close to 25 minutes.

However, it was good news for home fans as TVS Motorsport’s Abdul Wahid Tanveer — who finished behind Dakar Rally rider Rodrigues and runner-up Aravind K.P. (05:10:46 secs)  — earned the ticket to the prestigious 2018 Dakar Series by virtue of his third-place finish. Tanveer thus becomes the third Indian after C.S. Santosh and Aravind to qualify for the Dakar Rally.

Since the Dakar Rally allows automatic qualification to past participants, the slot from the 2017 Baja, organised by Northern Motorsport, went to Tanveer who finished in 05:25:44 secs. Tanveer also earned a ticket to this year’s Merzouga Rally in Morocco.

Building on his overall lead, Portugal’s Rodrigues – who had won all the four stages on Day One — was off to a strong start in the fifth stage on a hot Sunday morning.

In what was his first rally in India, Rodrigues put his experience to use in trying conditions and maintained his lead.

Aravind, who trailed by 18 minutes on Day 1, performed better but the gap proved too much to bridge. Tanveer too maintained a steady run throughout.

The Xtreme category saw intense competition between Gaurav Chiripal and Raj Singh Rathore, with the former taking home the trophy and a direct entry into the MS Desert Storm 2018. Rathore had led the field by a minute after Day One, but Chiripal — driving a modified Vitara — came back stronger on Day Two to finish in 6 hours, 22 minutes and 22 secs.