Augusta Masters: Rose, Garcia in lead before last round

The European duo, both 36, share the 54-hole lead six-under after one of the most riveting days of golf at the Augusta National Golf Club. 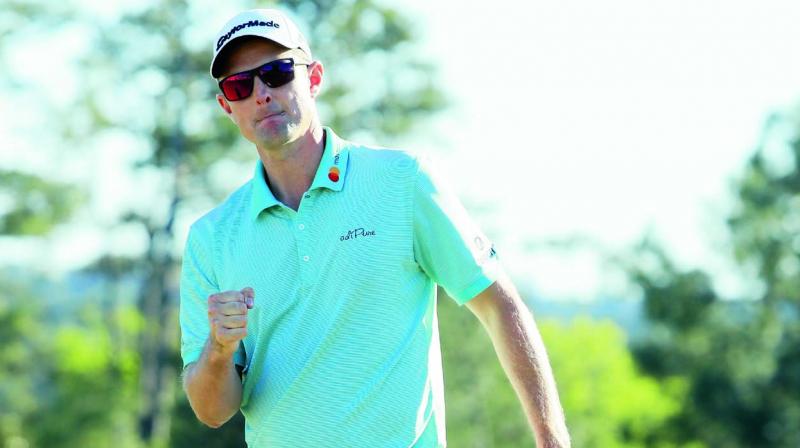 Justin Rose reacts after making a putt for birdie on the 18th green in the third round. (Photo: AFP)

Augusta: Sergio Garcia awaits his coronation, as the golfing fraternity marks Seve Ballesteros’ 60thbirthday while Justin Rose, after five birdies in his last seven holes, is ready to hang a Green Jacket alongside the US Open Trophy and the Olympic gold medal. The European duo, both 36, share the 54-hole lead six-under after one of the most riveting days of golf at the Augusta National Golf Club.

Making the Sunday mouthwatering will be the American Ryder Cup duo ahead of them with the 28-year-old Rickie Fowler, five-under, going out with ‘buddy’ 23-year-old Jordan Spieth at four-under.

As first round-leader Charley Hoffman and Ryan Moore form the third last pairing at four-under each, they pair ahead of them, Adam Scott and Charl Schwartzel, will hope to add another Green Jacket to they each have from 2013 and 2011 respectively.

Lee Westwood, the only active player to have played more Majors than Garcia, without winning one, is paired with the new European talent, Belgian Thomas Pieters, who each day has shown how good he will soon be.

As the Masters heads for its climax, the two outside Top-10 worth keeping a watch will be Rory McIlroy, who needs a Masters to complete his career Grand Slam, and the rising 22-year-old Spaniard, Jon Rahm, who played his third round with the veteran Fred Couples (one-over and Tied-21st), whose Masters win came two and a half years before Rahm was born. Both McIlroy and Rahm are tied 11th.

Phil Mickelson at two-over was three-over for front nine, and Jason Day playing with the club member, Jeff Knox, shot 69, came back from the cutline to shoot 69 to be three-over and Tied-27th.

Garcia was the focus as he had two birdies and two bogeys on front nine, and then nailed both the par-5s on the back — the 13th in a fortuitous manner after the ball inexplicably stopped on the steep bank of one of the tributaries of the Rae’s Creek on his second shot  and on the 15th he made a dream chip from over the green to three feet.